With the explosive popularity of group fitness classes like Pilates, yoga and spinning, women in New York City have a wide variety of classes to choose from.  Pugilistic sports like Boxing and Kickboxing have crossed over into this fitness category, boasting the benefits of fitness training while learning self-defense.

Fitness Self-defense is the newest compliment to past self-defense trends which include: reality based self-defense (RBSD) complete with foot stomping and eye gouging or the traditional Martial Arts (TMA) like Karate, Tae Kwon Do or Aikido, which include forms and theory based techniques.

For women who are focused on learning practical self-preservation tactics, against potential assaults, 05these trends are dangerously misleading and may instill a false sense of confidence.  The good news is that, learning to defend oneself does not require a ‘Black belt’ or a Martial Arts training lifestyle.

A woman can empower herself through the understanding of situations (both physical, mental, and emotional) that pose assault risk varying levels.  By understanding the handful of common threat scenarios, she can set boundaries as she is more cognizant of her environment and any threat that may occur within that environment.  A strong understanding of one’s environment is the first step to self-defense.  The skills and techniques are then acquired to defend those boundaries.

The below video addresses common scenarios and how Gracie Jiu Jitsu, uses leveraged based techniques to respond to these threats. 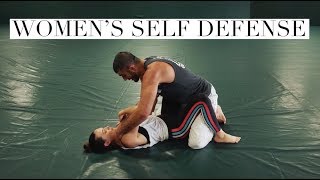 Below are 5 examples of scenarios and responses used to neutralize the larger opponent – the premise being that the attacker is larger and heavier than the woman:

1) Standing 2-handed front choke – When an attacker overpowers their victim by choking with two hands.

The response: Stiffen your neck and bow straight down putting pressure on both thumbs of the attacker and pivot 180 degrees underneath the attackers arm to escape.  Watch the video below at time (01:17-03:05) to have a better visual.

2) Rear-choke attack - The attacker surprises their victim from behind with a single arm across the neck to choke and/or control the victim.

The response: Following the same concept of targeting the weaker digits, the defender pivots towards the attackers controlling hand while grabbing the attacker’s wrist.  The direction of the pivot is always against the weakest part of the attackers grip (the thumb).   (see time 04:25-05:23)

4)‘The Mount’– The attacker pins their victim down to the floor, sitting directly on top of their hips, using maximum weight and leverage to pin their opponent down for complete control.

5) Inside ‘The Guard’- The attacker is on top of the defender, but between the defender’s legs applying forward pressure to assault or control the defender.

Note: It is important to understand, that these countermeasures are technical varying degrees of practice. While you do not need to be an advanced level practitioner, or commit to a martial lifestyle, they do require some drilling so that your body becomes familiar with the required movements.

Context is the critical component to self-defense preparation, training, response, and overall confidence.  Mentally, one must understand why and what they’re doing. 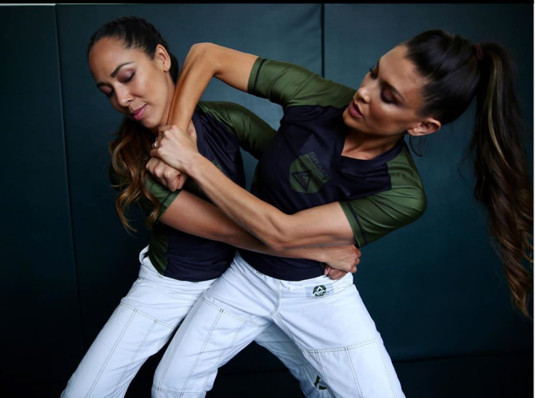 Why am I learning self-defense?

To set and defend ones personal boundaries.  Mental, emotional and physical boundaries.  As with neighboring countries, there are borders which are visible and invisible.  Knowing when those boundaries are at risk of being breached and knowing the protocols needed to address these threats.

What do I do if my personal boundary is breached, or at risk of being breached?

Understanding the varying levels of threat, a woman can establish protocols that are thought of in advance to avoid an actual assault.  Whether it is maintaining a strong emotional boundary, by verbally negotiating down an aggressive person or understanding at which point their personal boundary has been breached and taking the necessary steps to recover their safe distance.  Not having protocols in place for the varying degrees of danger, leaves a person too slow to respond to quickly developing threats.

How do I develop the confidence to defend my person boundaries?

Confidence organically develops once the individual has established her personal boundaries, the protocols to neutralize any attempts to compromise their boundaries and if necessary, apply the appropriate martial arts countermeasure to address the attack.  Through drilling these scenarios with a live opponent, the easier the self-defense techniques become.

Learning self-defense in a private training session, will certainly accelerate your development.  However, what is most important is having a partner to drill the techniques.  It’s not enough to have your ‘Blackbelt’ coach drill with you, but also others within your skill level.  Our suggestion is to learn self-defense through group classes in a non-competitive atmosphere and focus on the intent on the training.  Merely punching and kicking a bag to burn calories, leaves out the most critical facet of learning self-defense – the context.