It can sometimes be difficult to find mixed martial arts classes in NYC. While there is no shortage of gyms and schools where an individual can learn a specific style and take a martial arts class, relatively few places in the city train people in a way that would allow them to successfully compete as professional MMA fighters. The modern MMA has evolved in a way that requires fighters know several styles of martial arts, but most gyms in the city are run by instructors who are masters in only a single style. While those who train in gyms like these can potentially become masters of this style, this will not prepare them for the style of fighting common in MMA matches.

Modern-day Mixed Martial Arts fighting has evolved in the last twenty or thirty years following the success of the first Ultimate Fighting Championship in 1993 (known as UFC 1). The competition was initially meant to be a contest where masters in different styles competed against masters in other styles. In other words, a karate master would fight a boxing champion. Some of additional disciplines included in the early days of the UFC included can be broken down into three types of fighting:

Certain styles of fighting have been shown to be more effective than others depending on how each fight evolves. Strikers, for example, can dominate while both fighters are standing up, but quickly become vulnerable when the fight goes to the ground. Conversely, fighters who are trained in Brazilian jiu-jitsu are able to dominate while on the ground or in a clinch but can very quickly be thrown off their game if a striker is able to land several blows.

Over time it became apparent that success in MMA-style fighting requires one to have a strong background in several disciplines that incorporate aspects of striking, clinch fighting, and ground fighting.

Today, the most successful MMA fighters show us that mastery in any single style is not required in order to be successful. However, their training relies on adopting techniques from a variety of styles and blending them together so that they are equally comfortable whether they are on the ground, in a clinch, or standing up. It’s less about having a base style and more about incorporating effective techniques to develop into an efficient and complete fighter.

As MMA has evolved into its own style, so too have MMA classes. To use an analogy, think of the difference between a trade school and a liberal arts school. When a person goes to a trade school, they learn a specific trade. They eventually become masters at that trade. This is akin to typical martial arts classes (Karate, Jiu Jitsu, Kickboxing or Judo, for example).

Liberal arts students do not learn a specific trade. They do not go to a class called “liberal arts.” Rather, students learn English, history, mathematics, philosophy, and so on, with the goal of becoming well-versed in a variety of subjects that make up the liberal arts. They do not require mastery in a  single subject, instead they have a thorough understanding of the many subjects so they may call upon, and focus on, it as they pursue their ever evolving goal. MMA classes follow a similar philosophy.

Although the most successful MMA fighters now incorporate several disciplines to develop a style all their own, many fighters here continue to be primarily focused on one discipline as their foundation and develop ancillary skills in the other disciplines to complement their base. This is largely because NY State was the last state to legalize Mixed Martial Arts – professional MMA events were illegal in New York City until 2016. Those who wanted to compete in tournaments had to stay within a specific discipline and participate in events that only allowed this style of fighting.

Consequently, many Mixed Martial Arts schools remain stuck in this paradigm, for the time being. They primarily teach one style of fighting (typically the owner/founder’s discipline) and hire an outside coach/instructor to incorporate an ancillary discipline into their class offering.  This approach to Mixed Martial Arts classes is different from the non-compartmentalized approach to training in other parts of the country.

How to become an MMA Fighter in New York

Most fighters grow up learning a specific discipline. Some were high school wrestlers; others took karate throughout their youth. It’s only later that they develop into MMA fighters.

This evolution is anything but casual. MMA fighters must be focused on:

Typically, one will find a Mixed Martial Arts Gym that offer group classes for the casual practitioner.  The novice continues to take each single-discipline class (i.e. Brazilian Jiu Jitsu class or Kickboxing class) to a point of intermediate proficiency and understanding.  At some point in this stage, a very small percentage of practitioners begin to express interest in competition and find their way to an inner-circle of fighters within their Academy, who train during off hours.  These classes are typically done in private or classified as competition or pro-training sessions, which require a pre-requisite base of experience and invitation from the head coach.

This group of fighters is advanced enough to pressure test their techniques against other equally knowledgeable and competitive fighters. This team will train together, oftentimes for several hours a day. Additionally, each fighter is also responsible for separately conditioning, building their endurance and strength, and following a strict diet that is healthy, clean, and free of alcohol and other drugs. 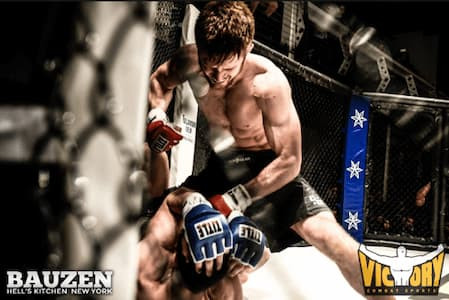 For those who do want to train to be MMA fighters, it’s not an easy road. Real MMA training is a lifestyle, and this lifestyle is rarely conducive to working a standard 9-5 job. Most people who are serious about becoming competitive MMA fighters typically work jobs with late or odd hours because their primary pursuit is not about advancing their career but following their passion for MMA fighting.

MMA Classes for Beginners… Where to begin.

While the appeal of Mixed Martial Arts comes from its multi-faceted form of fighting, many interested beginners may not know exactly where to start or how to choose the right school.  For most career-focused New Yorkers who are interested in learning to strike, clinch and ground fight – they do not necessarily want to commit to training like a competitor.  Instead, they should focus on the ‘Martial Arts’ aspect of the sport.  Learn Brazilian Jiu Jitsu, or Kickboxing in its more technical form.  You may even take in a sparring session here and there to enhance your technical knowledge.  Find an academy that focuses less on competition and more on student development.  The pressures of competition have a tendency to stunt development because of increased risk of injury and the temptations of immediate gratification from that ‘win.’

A student development focused Academy is not difficult to find, once you approach it logically.

Transparency – is there a curriculum?

Structure – are there lesson plans?

Safety – how is risk of injury mitigated?

There are many options when taking MMA Classes in the Big Apple, and most academies here are taught by world-class practitioners.  But we hope you have more requirements than just Googling ‘MMA Gyms near me’ or ‘Best MMA Gym in NYC’ when choosing the right place to train.  The difference may be as life altering for you as its been for us personally.  Happy  Training!