All martial arts training has three primary components. The first is learning at least one style of fighting to prepare yourself for combat against an opponent. The second is learning strategies that allow you to anticipate and counter the offensive of your opponent. The final piece of the puzzle is conditioning, which means preparing yourself for the rigorous physical strain of fighting. Without all three components, it is virtually impossible to be a successful fighter and an MMA fighter specifically. Additionally, people who want to train as MMA fighters need to understand the rules that govern the modern MMA, as well as the way MMA fighting has evolved.

While most people know that wrestling was practiced as far back as Ancient Greece, far fewer individuals know about the Greco-Roman sport of pankration, which was also a very popular Olympic event. Unlike wrestling, which is a highly regulated form of hand-to-hand combat, pankration placed very few restrictions on what fighters could and could not do. MMA-style fighting was also popular in Ancient India (known as kushti or “mud wrestling”) and other parts of Asia. Similar to today’s MMA events, fighters were allowed to do virtually anything to win, and moves were invented not only to knock out one’s opponent with brute force, but to get them to tap out through choke and submission holds. To be successful, fighters had to learn how to fight standing up and how to fight on the ground to avoid having any weaknesses that could be exploited by their opponents.

Fast forward to the late 1800s, and the story is largely the same with catch wrestling, which also involved a variety of fighting styles, but was predominately based on submission holds. Unlike pankration, catch wrestling was not an Olympic sport. Instead, it was far more of a spectacle, and catch wrestling became a feature of many traveling carnivals in Europe and beyond. A catch wrestler or “strong man” would offer to fight anyone in the crowd, and anyone who could pin or get him to submit would be awarded a cash prize. All holds were allowed, which is where the phrase “no holds barred” (or vale tudo, which means “anything goes” in Brazilian) came from. These strong men had to be ready for just about anything, since there were no rules and no way of knowing what kind of fighting styles their opponents were going to use. Additionally, these fights would sometimes drag on for hours, so one had to be in excellent shape to not merely be worn down over time.

The Founding of Brazilian Jiu-Jitsu

One of the most famous strong men of the early twentieth century was Mitsuyo Maeda, a Japanese judo/jiu-jitsu expert who moved to Brazil. In the 1910s, Maeda made such a strong impression on a young man by the name of Carlos Gracie, then 14, that Gracie decided to become one of Maeda’s students. By the late 1920s, Gracie had become an expert in jiu-jitsu and eventually came to run his own school. Among his students were members of his family. On top of running a school, Gracie also began staging competitions between his students and other fighters from different disciplines, such as Brazilian capoeira. These events were a combination of traditional martial arts contests and Jiu Jitsu. 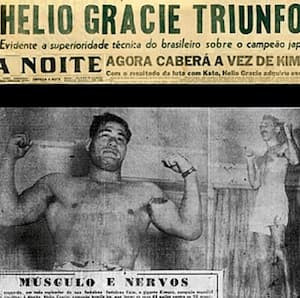 Hélio Gracie, the younger brother of Carlos, learned jiu-jitsu from his brother by attending his classes, but did not initially participate in fights, as he was considered too weak to be a fighter. He only understood the art of jiu-jitsu on a theoretical level. However, when Carlos failed to show up for a class one day, Hélio decided to step in as teacher, and his style was so popular that he immediately began leading his own classes. What made Hélio’s style unique was that he was not strong enough to execute many of the traditional moves of jiu-jitsu, so he had to adapt specific techniques and a unique strategy in order to compensate for his weak stature. He realized quickly that getting bigger or stronger opponents to the mat and into a ground fight neutralized their advantage over him, and this style of Gracie Jiu-Jitsu® soon allowed him to become a very successful fighter. Like the strong men from the carnivals several decades before, Gracie began taking on fighters from any discipline, and this spectacle became known as the Gracie Challenge. 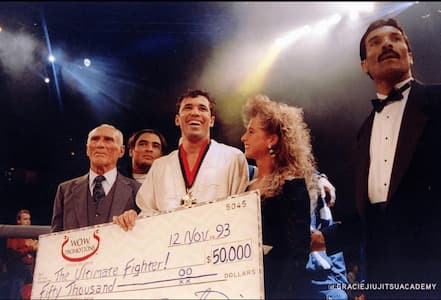 Hélio’s eldest son, Rorion, eventually taught the art of Gracie Jiu-Jitsu to the United States in the 1970s when he moved to Torrance, California. Word of Rorion’s school, as well as the Gracie Challenge, soon began to spread, and eventually a promotional team decided to put on an event modeled after the Gracie Challenge in the United States—the Ultimate Fighting Championship—in 1993. The event was initially meant to be a tournament to see which style of fighting (boxing, karate, jiu-jitsu, etc.) was the best. However, Royce Gracie, one of Hélio’s sons, and the smallest fighter in the tournament, was so successful and won so easily in many early UFC tournaments, that anyone who was interested in participating in the UFC quickly realized that they needed to have a firm understanding of ground fighting to be a viable contender.

Mixed Martial Arts training today continues to rely heavily on ground fighting reminiscent in the style of Gracie Jiu-Jitsu. However, MMA fighters now incorporate techniques from other disciplines to better suit the parameters for this newly founded combat sport.  Some of the most common techniques used by MMA fighters are found in the following styles of martial arts: 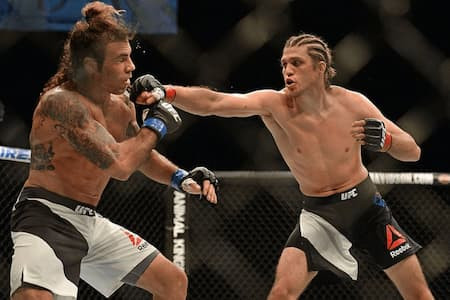 MMA training today is less about becoming an expert in any one of these disciplines, and more about developing a personalized style that employs elements from three dimensions: stand-up fighting, clinch fighting, and ground fighting.

Because MMA fighting is so multifaceted, it can be fought and won from these three dimensions.  Training is constant, and even rest days are active for MMA fighters who are preparing to compete, even if they are low impact. The fighter is solidifying what they already know and perfecting their technique.

On top of learning techniques that make them more formidable, fighters must also be in excellent shape to compete. On the one hand, this allows them to have the endurance to fight. On the other, it means they are in strong and flexible enough so that they do not injure themselves. MMA fighters condition through cardiovascular or aerobic exercise (distance running, jumping rope, swimming, etc.) anaerobic exercises (sprinting, interval training, jump squats), and strength training routines (weightlifting, body weight exercises, fast-twitch muscle workouts). They also practice yoga and pilates, as well as focus on exercises that strengthen their core. While the yoga studio may seem like an odd place for MMA fighters, the added flexibility that these individuals develop ensures that they do not pull or sprain a muscle before they even get the chance to fight.

The MMA has also come a long way since the days of vale tudo matches. Since MMA fighting was legalized in New York in 2016, it has taken on an official framework and is overseen by the New York State Athletic Commission, and fighters have had to adjust to comply with the new rules. Fighters may win a match by knockout or submission, as it was in the past. They can also win by points and judges’ decisions. The sport has weight divisions, timed rounds, a point system, and specific rules have been put into place to protect fighters. Some of these rules include prohibitions on head butting, eye gouging, groin attacks, spinal attacks, and rear head attacks. Some of these rules require participants to wear mouth guards and to use hand protection.

The MMA Fighter is Always Learning

As was the case with Hélio Gracie, the most successful fighters are not necessarily the strongest or the fastest; they are the ones who can adapt and who can employ the right technique to best neutralize their opponents. While modern MMA training relies on the same elements that have made fighters successful since the days of the Greeks—perfecting a style, learning defensive strategies, and conditioning—what is unique about MMA training today is that styles and strategies no longer come from a single discipline, but incorporate a wide variety of techniques and concepts from various disciplines to make fighters more versatile and difficult to predict. This is significantly different than when the UFC began, when most fighters were a master in one style against a master in a different style.

Many of the best fighters tend to be Jacks of all trades, masters of none. They are not black belts in multiple martial arts. In fact, many may only have achieved that level in one discipline and may only be a an intermediate level in knowledge in two or three others, and even successful MMA fighters may participate in group classes in Brazilian jiu-jitsu, Kickboxing, or Wrestling between scheduled fighting events because they continue to hone their craft.