A lot of parents may be hesitant to introduce their children to jiu-jitsu at a young age. For some, they worry that teaching their kids a martial art will send the message that violence is acceptable. Others may worry that their children could hurt themselves or others. Still others may want to enroll their kids in a martial arts class but may not know if jiu-jitsu is right for them. 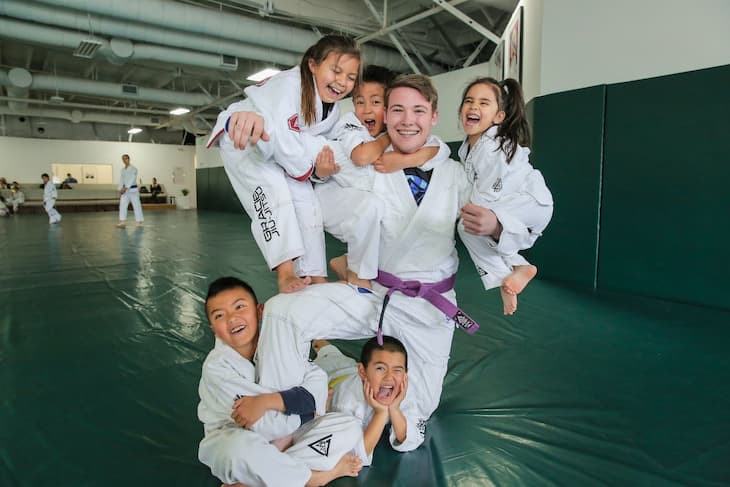 First of all, jiu-jitsu is by its nature a very safe form of martial arts, especially when it is taught in classes designed for children. Jiu-jitsu is primarily ground-based and teaches practitioners how to use leverage and applied pressure to control opponents and put them into submission. In pure jiu-jitsu, there is no striking and, to the untrained eye, it looks no different than wrestling. In fact, if you wrestle around with your kids, you can use this time to teach them the basics of jiu-jitsu.

Robin Gieseler provides some great examples of how you can use playtime as a way to teach your younger kids the very basics of jiu-jitsu. Gieseler is a black belt and head instructor at the Relson Gracie Jiu-Jitsu Academy in Columbus, Ohio, who has 20 years of jiu-jitsu experience behind him. He is also the father of seven kids.

How to Teach Kids Self-defense.

Robin’s first example teaches the basics of guard recovery and maintenance. In this case, you put your child on their back in an open guard position, approach them on your knees, and then try to tickle them. The hope is that they will then use their legs to push you away. This teaches them to use their legs to protect themselves and the importance of creating separation. As they become more comfortable, you can then start to gently take one leg as if you’re passing their guard, and then teach them use their other leg to maintain the guard. To get a better idea of what this looks like, check out Robin’s video with his four-year-old son Zyan. 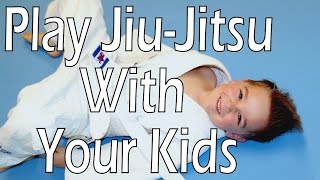 While your first concern is the safety of your child, you should also be cognizant of our own, since your child may wildly flail their legs around. Even it may not knock you out, catching a foot to the face is no one’s idea of fun.

The armlock is a slightly more advanced skill, but you can still teach it to younger children. As Robin explains in the second video with the help of his son Zinan, “What we want to do is teach them how to close the distance, to stay safe in a standing situation, and take the bully down to the ground and establish dominant control in the mount position.” Once they are in the mount position, many kids may want to grab the arm they hope to lock up too early, which this makes it more difficult for them to swing their leg around to successfully complete the move because their weight transfers to their legs.

To get around this issue, Robin has found that you can lift your child up (preferably by their gi if they have one), which allows them more freedom of movement to swing their leg around and complete the move. Robin has also found that you can get your child to become more accustomed to swinging their leg if you put a ball above your head and asking them to kick the ball. You can watch see this technique in action in the video below. 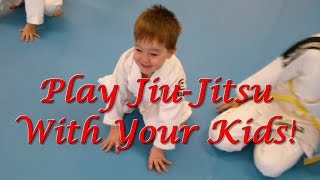 Teaching the front roll is great way to get them used to the kinds of movements and techniques that will play a central role in their jiu-jitsu journey. Furthermore, teaching them the difference between a front roll and a similar motion, such as a somersault, can help keep them safe.

As Robin observes, when performing as somersault in gymnastics, you push off with your feet, use your arms to guide, and then roll straight over your neck. While this movement is completely safe when it is done in isolation, it can become unsafe when we perform it with another body on top of us. Teaching proper technique can ensure that kids protect their necks and spines.

As Robin shows in the below video with his son Zoen, the easiest way to teach the roll is to instruct kids to put one hand down, to put their other arm between their legs, to look through the hole created by the space between their first arm and their knee, and to push off with their toes and roll over their shoulder instead of their neck. The reverse of this move, of course, is the back roll. What you want to focus on making sure they are using their shoulder as their pivot point instead of their neck. 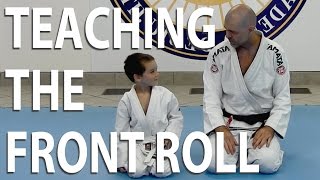 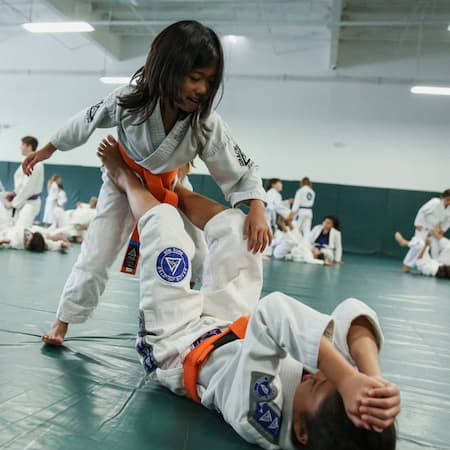 Teaching your child Self-defense should be Fun.

As shown in the examples above teaching a child self-defense is analogous to baby animals learning to hunt and fight through play.  It’s a stark contrast to what you may see in military movies of pain and discipline.  Children push the boundaries of their abilities through play and by allowing them to be vulnerable in such positive group environment they will flourish in their techniques and the confidence in applying them.