Anyone who has started to learn something that takes a lot of time and effort to master will quickly come to realize a fundamental truth: It sucks to suck. Particularly for people who are a little bit older and who have always been fairly good athletes, feeling like an absolute beginner at jiu-jitsu can be demoralizing. It takes you out of your comfort zone, it lays waste to your ego, and you will find yourself getting physically dominated by another person.

While this is no one’s idea of fun, the good news is that no one stays a novice forever because practice does make you better. More importantly, the more often you come back to the mat, the more familiar the techniques will become and the shorter the initial period of not being any good will be.

For all but the most gifted of natural athletes, how good you are at jiu-jitsu depends on how dedicated you are and how much time you put into improving. 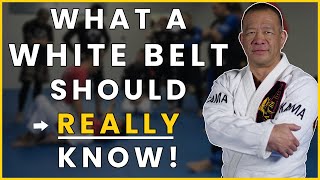 How Long Does It Take to Become Good?

It’s impossible to say how long it will take for any student to become a blue belt or to become good enough so that they feel comfortable on the mat. However, if you’re only coming to class once a month or so, you are almost certainly going to remain a white belt for a very long time because you don’t just learn jiu-jitsu through osmosis. Progressing through the belt system requires not just being enrolled in jiu-jitsu or watching videos online; it comes from spending hours on the mat.

This is not to say that you need to spend hours a day training. That type of commitment isn’t possible for most people and no instructor will demand that of a student unless the student hopes to become a professional fighter. If who just want to learn the basics of self-defense and establish a strong jiu-jitsu game, you should set a goal of going to the gym twice or three times per week to develop your technique.

What Should a White Belt Know?

While every gym is going to be a little bit different and some instructors may focus on particular techniques over others, Ryan Young of Kama Jiu-Jitsu provides a clear breakdown of what every white belt should know in the below video. Ryan’s curriculum may differ from students who are learning sport jiu-jitsu rather than self-defense, but he provides a systematic approach by looking less at individual moves and more at common positions that one is likely to encounter either in a street fight or a jiu-jitsu match. For Ryan, these positions can be broken down into three classes (mount class, cross-side class, and guard class), and then further into ten positions that have both an offensive and a defensive side.

He feels all white belts should know not only how to tap their opponent from each of these positions, but how to escape from the same positions when their roles are reversed. In other words, the positions in the below chart mirror one another, so if one fighter is in worst position (“Face down, his hooks are in, and you’re on the ground between him and the ground,” according to Ryan), the other fighter is in best position. Meanwhile, when one is playing guard, the other is trying to pass guard.

For Ryan, demonstrating proficiency is not about being able to repeat certain moves. Rather, he feels that students who are ready to move on from white belt to blue belt should be able to submit or escape from their opponent in a variety of positions. It doesn’t matter if you know six techniques that could theoretically allow you to escape side control. What matters is if you can quickly respond to whatever your opponent throws at you. In other words, you shouldn’t think of each row on the list as one item that needs to be checked off, but rather a part of your jiu-jitsu game with which you need to be comfortable.

More importantly, you should recognize that what you learn as a white belt does not become obsolete once you become a blue belt or a purple belt. Instead, you build on that knowledge and find better ways to implement these techniques that work for your particular style and body type. At the end of the day, being good at jiu-jitsu has less to do with memorization and more to do with understanding how to respond and adapt to your opponent in the most efficient and effective way possible.

Again, that only comes from hours spent on the mat.