Sport Jiu Jitsu in a Street Fight (Part 2 of 2)

Thu May
08:50
in Brazilian Jiu-Jitsu
by Ronin Athletics Team

On part 1 of this article we examined the two approaches to training Jiu Jitsu in NYC – the Sport focused and Street Self-defense focused approach.  It’s not a question of which approach is better, but more so a question of which suits the individual’s needs.  The challenge to newcomers of this have is the false perception that live submission training automatically equates to self-defense.  So the question stands, does sport Jiu Jitsu provide a dual purpose for both competition practice and self-defense?

So, Can Sport Jiu-Jitsu Prepare Students for Real-World Fights?

The answer is yes and no. A lot of the training in a sport jiu-jitsu gym is transferrable to a real-world scenario. Unfortunately, there are some things for which sport jiu-jitsu does not train its students.

How It Prepares Students for a Street Fight

Whether you are a casual fighter who comes to the gym a few times per week or someone training to seriously compete in jiu-jitsu tournaments, you will potentially have an advantage in most situations. Training improves conditioning, agility, and endurance. This is true for any athlete. It is especially true for people training to fight.

Secondly, any sport martial arts gym will prepare students for certain elements of a fight, even if they may fall short of looking at many real-world scenarios. Of all the fighting styles, jiu-jitsu is probably the best because it is the most like a street fight and the most all-encompassing of fighting styles.

Finally, it can be very difficult to escape from a jiu-jitsu hold if a person has never encountered one before. Even professional mixed martial arts fighters were initially stunned by these moves when they first came across them in the early days of the UFC. If a sport jiu-jitsu fighter can get their opponent into one of these holds quickly, the fight will likely be over within seconds.

How It Doesn’t Prepare Students for a Street Fight

Unfortunately, there are three primary reasons why sport jiu-jitsu does not prepare students for a real-world scenario. First, it does not prepare them to strike their opponent or defend against a striking attack. Second, learning only sport jiu-jitsu may lead fighters to instinctively go after points because this is the objective in a tournament match. These instinctive moves may leave them vulnerable to certain attacks that are common in street fighting, but not sport jiu-jitsu. Finally, the weight class system in sport jiu-jitsu prevents fighters from learning how to adapt their technique to take on opponents who are bigger than them.

1. Sport Jiu-Jitsu Is Not Strike-Focused.

Sport jiu-jitsu fighters typically don’t throw a lot of punches. This can become a liability for two reasons.

On the one hand, in the chaos they may feel compelled throw a punch because they think that’s what they’re supposed to do in a street fight. However, since they’re not used to including strikes into their technique, this may lead to unforeseen mistakes.

In a fight that Ryron and Rener analyze in the video (7:46), they point out that punching while in back mount is a prime example of this kind of error. If you’re throwing a punch, you’re no longer locking, controlling, isolating, and choking. The desire to hurt or do damage to your opponent leads to a loss of control and the primary advantage that you have, which is your ability to slow the fight down and maintain control while on the ground.

On the other hand, not being familiar with striking means sport jiu-jitsu fighters may not be able to adjust and defend against this kind of attack. Though it’s true that most street fights end up on the ground, it’s also true that most street fights begin standing up and with fists. Since sport jiu-jitsu doesn’t train fighters to defend against punches from the standing position, these kinds of attacks can catch them off guard.

2. Not All Training Is Beneficial in All Scenarios

When fighters become accustomed to participating in sport jiu-jitsu tournaments, they may instinctively fight in a way that would be appropriate for a tournament but is absolutely disastrous in a street fight. For example, 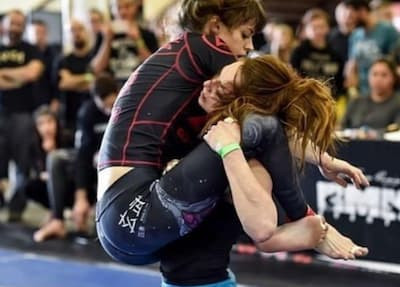 On top of not being prepared to deal with punches or opponents who act irrationally, sport jiu-jitsu does not train fighters to adapt should they have to face someone far larger than them. Though the Gracie name became famous because they would take on any fighter, regardless of size, modern jiu-jitsu tournaments keep fighters siloed in weight classes, and gyms that focus on this kind of training do not teach fighters how to change up their strategies to prepare for this scenario.

Just because you are a sport jiu-jitsu fighter doesn’t mean you have to abandon your gym and start attending Certified Gracie Jiu-Jitsu Training Center®. Rener and Ryron introduce four filters that you can use to adapt/modify your sparring sessions at your gym to make it more transferrable to a street fight situation:

Check out the video in Part 1 of this series for the explanation of each of the 4 fight filters above.

You only need to use these filters once or maybe twice per week, but they will get you and your sparring partner thinking out of the box and they may help you reconsider your technique and your approach.

In this exercise, you get in a bottom position. Your sparring partner then has one objective: Touch your head. During this exercise, you should focus on two things to manage the distance: Blocking their hands and preventing their arms from retracting. They can’t strike effectively without space. However, if they try to pull back too far, this allows you the chance to escape.

After a few minutes, switch positions.

In this exercise, you are in the top side mount position. Your partner is in the bottom. Their objective is to break free without relying on jiu-jitsu patterns or moves. Instead, they should act as irrationally as possible to teach you how to anticipate this kind of struggle while remaining calm and focused.

After a few minutes, switch positions.

As was mentioned above, not knowing how to strike at the opportune moment can mean you lose control of a dominant position. In this exercise, try to place a strike with your partner. This does not mean that you should actually strike you partner—you just want to place the strike or to hit the mat in a way that lets your partner know that it would be a strike in a street fight. The goal of the exercise is to learn how to maintain control while striking strategically. In a five-minute roll, you should expect to only get three to five strikes.

In this exercise, your goal is to purely remain on the defensive while your partner goes on the offensive. Your goal during the exercise is to learn how to bide your time, to weather the storm, and to wait for opportunity to present itself.

As Ryron says, some of the best advice he ever heard was from his grandfather, who told him: “Stop trying to defeat your opponent or your training partner; just don’t lose.” If you can keep a cool head during the chaos of a street fight and act strategically and efficiently, you have a far better chance of coming out on top.