There are two approaches to Brazilian Jiu-Jitsu training in NYC—the tournament approach and the self-defense approach. The tournament approach is about learning how to succeed in BJJ tournaments. The self-defense approach is about learning the principles of Jiu Jitsu to prepare you for any of life’s challenges including (but not limited to) physical altercations. This typically means real world situations, but it can also apply to scenarios like those one might encounter in an MMA fight.

With the tournament approach, fighters must learn the rules that have been adopted by BJJ organizations. By knowing these rules, they can avoid losing points or, worse, being disqualified. Fighters must then devise strategies that work within the rule system to win matches and tournaments. On top of learning these rules and BJJ techniques, fighters need to train inside and outside of their gym. Most training regimens include: 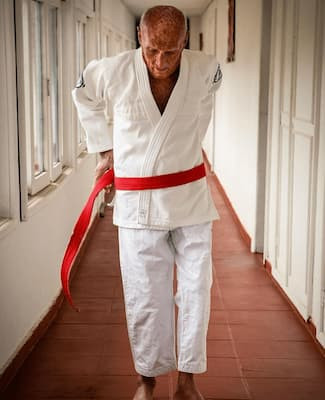 Practicing isolation drills is key to the tournament approach because they recreate situations that are likely to arise during competitions. When fighters are placed in a control position, this allows them to perfect certain holds, devise ways to finish matches, and prevent escapes. When they are in a situation where they have been mounted, it teaches them how to prevent submission holds, stop additional attacks, and escape.

The self-defense approach has a longer-term view of Jiu Jitsu training.  It is a constant improvement and the benefits are far more impactful than competition wins. Like the tournament approach, it also incorporates conditioning and strength training, which may or may not take place in the gym, but the self-defense approach differs in how BJJ techniques are taught.

Instead of focusing on tournaments, the self-defense approach focuses on learning the fundamentals of BJJ, its principles and how its tactics can be applied to real-life situations.   The manifesto of Gracie Jiu Jitsu® is about ENDURING and ‘Weathering the storm.’

Helio Gracie viewed self-defense as not merely defending oneself from another person but using Jiu Jitsu’s principles to endure against any challenges in ones life.

Jiu Jitsu principles employed in the physical can also be employed to the metaphysical.  In a physical altercation against a larger heavier opponent, a Jiu Jitsu student is taught to stay calm and employ defensive techniques until his or her opponent depletes their energy, at which point a counter measure is employed to reverse the control of the situation.  This principle is also effective, when one faces a challenge in their life, such as stress.  The student applies their learned skill in staying calm, defending and maintaining, while looking for the right opportunity to reverse or escape the situation.

The Difference Between Tournament and Self-Defense

To use an analogy to better explain the difference between the two, think of the ways a beginning musician learns their instrument. One way is to pick out songs, and then learn how to play them well. Another way is to learn scales and theory. Ultimately, both routes may produce excellent musicians. However, in practice, the former produces a musician who can play certain songs very well and has learned certain techniques that are very impressive, but they may find it difficult to deviate from the given structure of the song. The latter method, meanwhile, produces a musician who may not have perfect technique, but they appreciate how songs are put together and they are typically more capable of improvising.