Sport Jiu Jitsu in a Street Fight (Part 1 of 2)

Thu May
08:26
in Brazilian Jiu-Jitsu
by Ronin Athletics Team

For people who are just starting to learn jiu-jitsu, it is important to recognize that not all gyms are the same. Though all jiu-jitsu classes will teach the principles of the fighting style, there are significant differences in how some gyms choose to convert these principles into practice. The distinction is especially important if your objective is to learn self-defense. 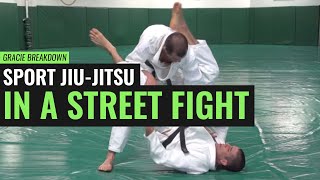 The Two Types of Jiu-Jitsu Gyms

Sport jiu-jitsu is the kind of jiu-jitsu that you see in jiu-jitsu tournaments. There are virtually no strikes in this style of jiu-jitsu, as it is focused primarily on sweeps, guard passes, and holds. Additionally, these tournaments are governed by strict rules and regulations. There are time limits, weight classes, and a point system. If the match can’t be decided within the time limits, the fighter with the most points wins. Consequently, fighters learn how to use the time limit to their advantage and commit to scoring as many points as possible. Both the scoring system and the match’s time limit have a significant influence on the style of sports jiu-jitsu fighters.

As you can probably guess, street jiu-jitsu gyms primarily focus on teaching students how to defend themselves and fight in more realistic scenarios. In street jiu-jitsu, there are no time limits, weight classes, or points. More importantly, street jiu-jitsu places a greater of an emphasis on defending against strikes and avoiding positions that leave one vulnerable to serious injury. For this reason, most mixed martial arts fighters tend to gravitate towards street jiu-jitsu gyms.

Which Type of Gym is Better for Self-Defense?

However, the extent to which sport jiu-jitsu is transferrable to a street fight is something that people have argued about for years. In fact, it was even the subject of the video released by Ryron and Rener Gracie. On top of musing over this question, the Gracies also took the opportunity to discuss ways that fighters in sport jiu-jitsu gyms can alter sparring sessions to make them more realistic without harming their partner.

However, before delving into the question of how transferrable the skills associated with sport jiu-jitsu are to a street fight and noting the Gracie’s tips, it’s important to mention that not getting into a fight in the first place is better than winning a fight and most certainly better than losing one. This means practicing ego control, as well as avoiding escalation whenever possible.

How Not to Escalate

If you can avoid these kinds of situations and refrain from putting others in a position where they feel as though their only choices are to look weak or to meet your level of aggression, you can avoid potentially explosive scenarios. Furthermore, if you can learn to not feed other’s aggression by shrugging off their attempts to challenge you, you can avoid a lot of bad situations.

Unfortunately, there are times when others will behave in an aggressive manner and leave you without a means of de-escalation. In these scenarios, the most important thing you can do is to try to remain outside of what Rener Gracie described as the “red zone.” 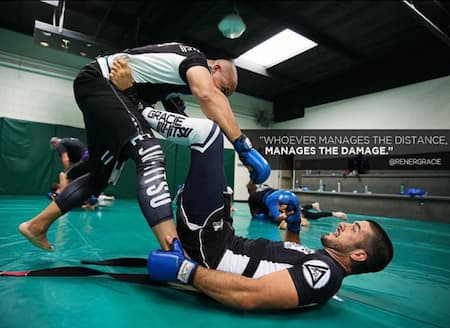 Being in the “red zone” means you are close enough to someone that they will be able to strike you before you can get your guard up. If you are less than one arm-length away from another person, you are in the red zone. If you find yourself suddenly in the red zone, you have three options:

Getting out of the red zone is obviously the best option. It allows you to potentially deescalate the situation or to better prepare for an assault.

When you cannot get out of the red zone (say, because you are in a crowded area), the second-best option is to continue to try to deescalate from where you are. However, in this case, assertively place your hands on your aggressor’s biceps and to speak calmly as you try to deescalate (pro tip: keep your head a good distance away from theirs to avoid a headbutt). Additionally, by placing your hands on their biceps, you can better assess the situation physically. If their arm is relaxed, then they are not planning to strike you. If you feel their arm tense up or start moving, you immediately know something is coming. This allows you to respond by evading their strike or entering the clinch.

Finally, if the situation is such that you cannot avoid a fight, only then should you move right into the clinch.

While Jiu Jitsu as a sport provides the practitioner some advantages in a real-life scenario, it is likened to a Football player, College Wrestler or Amateur Boxer having more skill than their opponent.  However, it does not take into account the presence of large size and strength disparity along with erratic countermeasures the opponent may have over the skilled sports practitioner.  There is a general framework and context that the self-defense focused Jiu Jitsu player practices, that make all the difference in these realistic scenarios.

Check-out Part 2 of 2 of this topic, ‘Sport Jiu Jitsu in a Street Fight’