Jiu Jitsu is a Language

One of the more interesting ways to think about learning Jiu-Jitsu is to think of it as learning a language. UFC Fighter and Jiu Jitsu Champion, Ryan Hall, brought up this point recently while on Lex Fridman’s podcast. Hall speaks more like a philosopher than a fighter when he notes that the process of learning Jiu-Jitsu requires experience that one can only acquire on the mat.

“The way that I perceive the world is deeply impacted by the language that I learn.”

Hall asks us to think of how we learn a language. Typically, we begin with the most basic building blocks. We learn words: adjectives, nouns, verbs, and so on. We also learn that these different categories of words perform different operations. Adjectives modify nouns, for example. Eventually, we learn how to form coherent sentences because we understand the structure of language.

Over time, and through the iterative process of speaking and writing and thinking in this language, we begin to modify how we use language and shape it in our own unique way. As we learn more words, it is not for the sake of simply repeating them on a vocabulary quiz, but to incorporate them into our unique style of expressing ourselves. The more words we know and the more we use them within the structure of language, the more nuanced our expression can be.

Eventually, this comes to shape how we think. As Hall says, “The way that I perceive the world is deeply impacted by the language that I learn.” 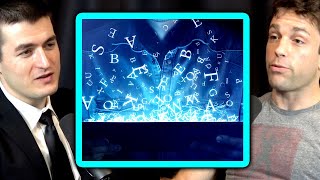 It is true not only of Jiu-Jitsu and language, but hundreds of other pursuits. Music is just one example. If a person knows theory and scales, it is no guarantee they’re going to be able to sit in with an unfamiliar group of musicians. In fact, this is why most bands are not very good when they start. They need experience of playing the same songs repeatedly with the same group of musicians. This iterative process allows them to make subtle and organic modifications to how they play. Eventually, they begin to play as a cohesive unit.

This is true even for an individual musician who is playing a solo piece that was written hundreds of years ago and has been played by millions of other musicians. A good musician will make the piece unique because they come to it with a unique style that represents the lens through which they see the world.

Are you a ‘Sequence collector’?

This latter point is crucial. “It’s a discovery process and no one can cheat that process,” Hall says. It’s where one acquires not just a style, but a deeper appreciation and understanding of Jiu-Jitsu. If a person avoids going to class or doesn’t go through the process of trying out new sequences that only end up working after a countless number of minor modifications, they never become more than what Hall calls “sequence collectors.” If a person is just repeating what they see in an online training clip, they are just parroting another fighter’s moves. They are not really speaking a language or developing as a fighter.

Gracie Jiu Jitsu’s system of training Jiu Jitsu follow these principles.  The Gracie Combatives program is your handbook of phrases. The Master Cycle program you begin to engage in structured Jiu Jitsu conversations with different training partners.  Learn more about, ‘THE GRACIE APPROACH TO TEACHING JIU JITSU (PART 2 OF 2): THE CURRICULUM AND A NEW WAY OF SPARRING.’

“I don’t believe in that form of learning anymore. It does hold some value, but it is not enough. You need to go class,” he says.

The language of Jiu Jitsu is the freedom of expression.  Using a memorized set of techniques is analogous to using a handbook of common phrases when visiting a new country.  Common phrases are a powerful tool to immediately engage in conversation; to find opportunities that will deepen one’s knowledge during instances that require more precise rhetoric.

The common phrases (ie. memorized techniques) is necessary to immediately engage in your Jiu Jitsu training with a partner.  But more sequences that is memorized passed the fundamental techniques will only delay your development.