Mixed martial arts fights are legal in forty-nine states, with New York being the only state that banned the sport. Now that’s set to change since New York’s state legislature has finally approved legalizing professional MMA.

In March, the state’s Assembly joined New York’s Senate in passing the bill. In previous years, the Senate had repeatedly approved the legislation, only to see the MMA bill die in committee and not make it to the Assembly floor for a vote. On April 14, New York State Governor Andrew Cuomo signed the bill, and it will shortly become law now that he has signed it. He has already added $3 million in expected revenue from cable television fees and MMA ticket sales to his budget for next fiscal year.

In an odd way, a twist of fate due to a corruption scandal helped pave the way for the passing of the bill. Sheldon Silver, the state Assembly Speaker and an opponent of MMA, had to resign from his position last after being nabbed on federal corruption charges. He was subsequently convicted of the charges. Assemblyman Carl E. Heastie of the Bronx became the new Assembly Speaker, and since he had previously co-sponsored the MMA legislation, his presence helped get the bill passed.

According to numbers from the Ultimate Fighting Championship (UFC), having MMA will bring in approximately $135 million in year in revenue for the state of New York. Mixed martial arts matches are expected to be held at arenas throughout the state, including the legendary Madison Square Garden.

MMA fights are expected to start taking place towards the end of 2016, after the New York State Athletic Commission sets up regulations for the sport.

Lawsuits against state will cease

Thanks to the sport finally being legalized in New York State, this means that the current lawsuits against New York for banning the sport will end. In November 2011, UFC, as well as MMA fighters including Jon Jones, Gina Carano, and Frankie Edgar challenged the constitutionality of New York State’s 1997 ban on the performance of live professional MMA within its borders.

On August 17, 2012, The Fight Lawyer reported Judge Wood granted the Defendant’s Motion to Dismiss counts IV and V – the counts challenging whether or not the Due Process and Equal Protection analysis required the Courts to determine a rational basis for the law either at the time the law was passed (1997) or if they should take into consideration evolved MMA rules, safety records, and overall acceptance to mainstream society in its analysis. Furthermore, the Court stated that the UFC’s main recourse for these claims should be with the Legislature and not with the Courts. Now this legislation has done that.

Why MMA was banned in New York in the first place

When mixed martial arts first became popular, it was considered too violent for the public. So states like NY banned the sport. But as time went on, the sport became more mainstream and other states rescinded their ban, NY continued to be one of the few states where professional MMA is illegal. Though all of martial arts and combat sports that make up MMA, everything from wrestling to kickboxing to karate are legal in the state, the combination is illegal. Over the years, a variety of people argued in favor of legalizing MMA in New York, to no avail.

What about Amateur MMA?

Amateur MMA in New York however, is a much more nebulous issue. Technically, New York State does not regulate it at all, which provides legal wiggle room for underground amateur MMA organizations to pop up. Until only recently, there hasn’t been a real organization in place to provide structure for amateur MMA in New York. Fighters had to either go to New Jersey or fight in competitions that didn’t necessarily have all the requirements, regulations and infrastructure necessary to put together events that are more sports-like and less like the old days of vale tudo. The World Kickboxing Association has recently become a vital sanctioning body when it comes to regulating MMA. They are also involved in sanctioning karate events.

During the last three years though, there have been amateur MMA shows throughout New York. The New York Fight Exchange (NYFE) has become the premier location for such events. Over the years renowned training facilities like Ronin Athletics have sent students and fighters to compete in Amateur MMA events at places like the NYFE.

Watch highlights of our MMA, Kickboxing and Conditioning Coach Adrian Czmielewski competing his way to victory at the NY Fight Exchange (His fight starts at 26:05): 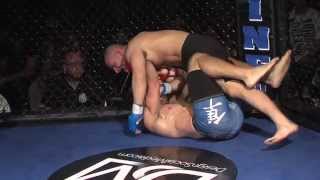