Rener and Ryron Gracie have been head instructors at Gracie University since the age of 18 and 20, respectively.  Having managed all aspects of Jiu-Jitsu training and program development.  They have personally observed the rates at which people are quitting their Jiu-Jitsu journey especially, those above 40 years old tend to have a higher rate of quitting while those just approaching 40 are considering quitting soon. Through their observations and what they’ve learned from their grandfather, Grandmaster Helio Gracie, they developed five rules to roll for those who want to train Jiu-Jitsu for the rest of their life. These are universal rules, that when adopted unconditionally, enables someone to roll till the end, like Grandmaster Helio. The five rules include; 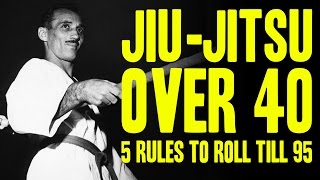 The term ‘Boyd Belt’ in Jiu-Jitsu refers to a philosophy of training developed by Rener Gracie in regard to rolling with people of different ages and weight classes. Upon having a deliberation with a well-known Gracie University Black Belt and Instructor, John Boyd.  Rener realized that he had to devise a way to explain what it is like to roll with people of different ages and weights. According to Rener, Boyd had trouble grappling with a blue belt that was 20 years younger and 60 pounds heavier than him. Boyd convinced that he should have submitted the blue belt, spoke to Rener about his frustrating experience rolling with a much lower Belt.  Rener encapsulating this very common experience, coined it the "Boyd Belt."

So, what precisely are the “Boyd Belts” in Jiu-Jitsu?

Essentially, Boyd belt is an idea that for every 20 pounds someone has over you, they are assumed to be one belt higher. For instance, if you are a 160-pound blue belt and grapple with a 200-pound blue belt, the weight advantage they will have over you will be the same as having a brown belt over you. Similarly, for every ten years, a person is younger than you, it indicates another belt level over you. Generally, no matter how someone is heavier, older, aggressive, or younger, training Jiu-Jitsu help to counteract the Boyd Belts.

A Jiu Jitsu ‘Guard Pass’ is used in reference to when the athlete in the uppermost position manages to surmount the legs of the opponent on the ground position and maintain the side-control position or North-South angle over the opponent.   But in the context of our discussion, the ‘Passing of the Guard’ is understanding the natural cycle of ones Jiu Jitsu journey.

Rener and Ryron addresses the reality of Jiu Jitsu fathers tapping out sons, until one day Jiu Jitsu sons begin to tap-out their fathers frequently.  The father and son metaphor are for any Jiu Jitsu practitioner rolling against someone younger, stronger and at the prime of their Jiu Jitsu journey.  Understanding that while you are practicing the same art form with someone younger and less experienced, the natural laws of life must be observed in Jiu Jitsu as well.  A 45 year old Purple belt, training twice a week, will naturally succumb to a 25 year old Blue belt training 5 days a week, and so by accepting this rule, will the 45 year old be able to continue training effectively and co-exist with their younger counterparts, based on the phase in their personal Jiu Jitsu journey.

‘Things that matter most, should never be at the mercy of things which matter least’ – Rener Gracie

Rener and Ryron emphasize that the ego is crucial for anyone who aspires to be exceptional in Jiu-Jitsu. We are taught to abandon our pride and that we either win or learn. Having ego can help someone to win. The desire to win is a direct result of your ego; conversely, ego at times can be a barrier to our victory. Acknowledging the ego comprises believing in oneself that I am able, and others are able as well. Rener summarizes that things that matter most should not be at the mercy of things that matter least; he meant that things that can contribute to one's wellbeing, for example, health, business, and relationship should not be compromised by things that matter least, which are centered around trivial things.  By acknowledging the ego early, you will learn to manage your expectations and be prepared for the temptation to quit from an un-checked ego.

Accept the highs and lows.  Rener explains that anyone who has received a black belt, has experienced the ‘black belt bounce back factor’. Meaning that in life, we must anticipate the universal truth that things will happen to deter us from what we are doing. When such things occur, many people QUIT.  But, how do we develop the ‘bounce back factor’?  We do this by reconciling our motivation to improve our quality of life through Jiu Jitsu training, with the potentially demoralizing situations that occur during training.  A large part is truly absorbing and practicing the message in Rules 1, 2 and 3.

Rener ascribed his grandfather Helio was not submitting, sweeping, or smashing anybody at the age of 95. He could call on anybody and practice Jiu-Jitsu irrespective of their weight or age. Grandmaster was confident that he could perform Jiu-Jitsu with energy and vigor as if he was 25 years old.  How was Grandmaster Helio able to do this?  The Grandmaster did so by investing in the philosophy he adapted at the start of his journey, which was – Survival First. Ryron explained that the Grandmaster defined his Jiu Jitsu journey with the Survival First mindset.  From the first time he developed his own style of  [Gracie] Jiu Jitsu® to adapt to his frail body, to the challenge matches that made him famous, to teaching his many students and continuing his practice well into his 90’s. Thus, Rener encourages people out there to adopt this philosophy of following the leader irrespective of their ages.  Adapt the Survival First mindset to guide you throughout your Jiu Jitsu journey.