Thu May
13:31
in Brazilian Jiu-Jitsu
by Ronin Athletics Team

In a recent interview with Lex Fridman, Sam Harris talked about one of the benefits of jiu-jitsu that often gets overlooked. In addition to learning self-defense, taking up a martial art like jiu-jitsu has the potential to change the way that you think. In particular, it can help you learn to check your ego.

What Does It Mean to “Check Your Ego”?

The phrase “check your ego” is stylized way of asking someone to practice better self-awareness and self-control and to adjust their perception of self. This can be difficult, since we all feel as though we are the main characters in our own narratives. More importantly, we tend to interpret events in a way that reinforces how we already see ourselves and protects our egos from direct challenges. When we run into a situation where that kind of self-deception becomes impossible, many people lash out.

Checking your ego, therefore, does not mean viewing yourself exclusively through a negative lens. It means taking a step back and finding a balance of self-importance, self-esteem, and self-confidence that is more in line with your actual situation. Lex illustrates this point by talking about how many surfers view themselves in relation to the ocean, and that the humbling experience “puts you in the right scale of where you are in this world.”

Having this kind of humility allows them to avoid self-deception and to recognize that there forces far larger than themselves. When things don’t go their way, they don’t experience it as a shock to the ego, so they don’t get upset.

What Does “Check Your Ego” Mean in Jiu-Jitsu?

In many jiu-jitsu schools, new students are told on their first day to check their ego at the door. What this means is that you need to accept that you will not be the best the first day you walk in. People who are more experienced than you will be able to beat you. You will be submitted by your training partner. You will be physically bested, and it will not be because the other fighter “got lucky.”

Jiu-jitsu also goes a long way in canceling out luck. If you take a shot from center ice in hockey, there’s a chance the puck might slide into the goal. If you swing the bat when you’re going up against a pitcher who can throw 100 mph fastball, you might get lucky and connect with the ball. However, as Sam observes, “There’s no lucky rear naked choke” that you’re going to perform on a black belt. You are just almost certainly going to lose when you try to fight them using jiu-jitsu.

This is not because you are weak. It is because you don’t have the tools to defend yourself, whereas people who have studied jiu-jitsu do. If someone is sitting on you in the mount position or they have you in a headlock, your instincts about the best way to escape are probably wrong. “Your intuitions about how to do this are terrible, even if you’ve done some other martial art,” Sam said in the below interview. Once you learn how to do it, “the difference is night and day. It’s like you have access to a completely different physics.” 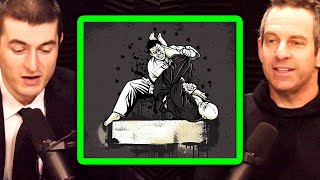 By checking your ego, it’s a way of preparing and acknowledging that you are going to be bested so that you don’t lash out when you inevitably get tapped or choked out.

Applying This Lesson to Your Worldview

In his interview with Lex, Sam goes on to explain why this is an important lesson to his relationship with the larger world. When you are sparring or fighting using jiu-jitsu, there’s no room for bluster or denial. As Sam eloquently says, “It’s a language and an argument you’re having where you can’t fool yourself anymore.” Self-deception gets stripped away. You are left with something that is honest and conclusive.

Unfortunately, verbal arguments are far less definitive than jiu-jitsu is. Individuals who want to protect their ego will double down on a lie, refuse to concede that they’ve been intellectually bested, or resort to any number of logical fallacies so that they can walk away with their inflated sense of self undiminished. Particularly when these kinds of arguments play out in public forums, people tend to take sides and the idea of victory becomes a matter of perception. Even within the realm of science, one becomes more interested in proving themselves right and the other side wrong than a genuine search for truth, which ultimately corrupts the very idea of truth.

For Sam, learning to check his ego by practicing jiu-jitsu allowed him to become capable of having discussions that center on the search for truth rather than affirming his original position, which in turn makes him a better thinker, a better scientist, and a better person.