Why Did You Stop Fighting?

A student asked me this question recently. He’d just seen one of my old amateur fights on YouTube. Despite losing the decision, it was one of the best performances I ever had, and I was still an amateur (though this was before the big push to regulate Professional MMA via state sanctioning bodies, as is today’s standard). The most notable thing about that particular fight was that it was against future UFC veteran, Joe Lauzon, a man who holds the record for being awarded the most “Fight of the Night” and “Submission of the Night” bonuses in UFC history. His fighting style has always been exciting and aggressive, so you can imagine that our encounter was quite the barn burner.

There is a short answer and a long answer to the student’s question. The short answer is that I never wanted a career as a fighter. I never really identified myself as an athlete or fighter. Martial arts were the first thing that I ever felt a deep passion for. Fighting was just one particular chapter of my martial arts growth and journey. Around the same time, I also had the opportunity to start teaching martial arts such as JKD, Kali, Kickboxing, etc before moving onto MMA/BJJ. I felt a certain fulfillment that I knew I would never get tired of, and a sense of purpose and contribution that has ultimately defined my life’s path.

The interesting thing is that these two aspects – fighting and teaching – didn’t pull me in opposite directions at that particular time. They were like two narratives of the same story being played out, and it was going to ultimately demand I be honest with myself about my character, identity, and where this story was ultimately going to take me. I won’t have to tell you why I stopped doing something if you understand why I did it in the first place … therein lies the long answer.

My MMA fights all took place between 2001 to 2006. This was a very different era in comparison to what we are accustomed to today. Fortunately for me, this happened to be the only era I could have ever really fought in – during the infancy of an emerging sport that would eventually become a worldwide powerhouse. Before MMA became widely recognized, it belonged more to martial artists, an interesting sub-sect of nerd culture. Any martial artist, if pressed hard enough, will admit that being a nerd is just a way of saying you are as unapologetic as you are passionate in how you approach whichever subject fascinates you most. For some it’s chess, math, theater, or comic books. For us, it was punches, kicks, nunchucks, and the occasional flying technique or death-touch. Mixed Martial Arts competitions were offering us the opportunity to be involved in something which, up to a few short years ago, we had only seen in video games or action movies. What nerd could possibly say no to that?!

Today you don’t have to be involved in martial arts to know what MMA is and you don’t even have to be a sports fan to have heard of the UFC because it’s permeated that deeply into our society. Because of the immense notoriety that the sport currently enjoys, there is more “technology”, evolved training methods, and opportunity for anyone aspiring to fight than ever before. That in turn has also raised the bar considerably in regards to demanding the utmost in professional skill and an athletic lifestyle commitment. When I hear someone say they want to be a pro UFC fighter, they might as well be telling me they want to play in the NFL and be in the Super Bowl one day. If we liken today’s era of mixed martial arts to a futuristic Heinlein-esque (c’mon guys, Starship Troopers, hello?) sci-fi movie with military-grade exo-skeletons, lasers, and unmanned weaponry in a far off world … well, then I fought in the era that’s more analogous to the wild west, where all you needed was a hat, boots, a trusty revolver, and the guts (read: dumb enough) to show up at dawn.

Looking back at the names on some of those first few fight cards I was on … most are now either professional fighters (some are UFC veterans) or Black Belts in BJJ (or expert-equivalent in their combat sport). Many, like myself, are school-owners and full-time martial arts coaches. I feel fortunate to have been at the right place at the right time, and I feel privileged to have had the opportunity to test myself against the most legitimate competition around and literally share a stage with some future greats. While I was never a prodigy or a favorite, always more the journeyman or underdog, I can rest comfortably knowing that I took my shot while that window of opportunity was open. In my more common vernacular, I’d like to think that I kept it quite real.

The last year of my involvement in the fight game came in 2006 with two pro-fights earlier that year, both in big Atlantic City venues (The Taj and The Tropicana). Later that year I founded my gym, Ronin Athletics. While the name and training group had been around a few years before that, this was our first brick-and-mortar, full-time spot in New York City. It was no coincidence these two things happened in the same year, and as I turned 30 which is a time you tend to find one or even many proverbial forks in the road. That was nearly a decade ago. Since then I’ve competed and won my fair share of grappling tournaments, have coached students to that same goal, have watched some of the most committed go from White Belt all the way to Black Belt in Brazilian Jiu-Jitsu (alongside me earlier this year) and become coaches and teachers themselves here at the gym. Most importantly I have forged several strong and genuine connections with the people I have the privilege to teach and interact with on a daily basis.

I realized that this is what I’m meant to be some time ago. It has become the vehicle for my personal growth. Through the years it has helped me define my strengths and potential, while also confronting my fears and weaknesses. None of that would have been possible without fighting. It wouldn’t have been authentic introspection. Fighting led me here but wasn’t meant to take me all the way. I had that revelation very early on in my “career” as a martial artist, and I’m reminded on a near daily basis how lucky I am to be doing what I love.

The last few times I found myself inside a cage was to corner my student/fighter, Adrian, who is about the same age I was when I fought. It’s no exaggeration to say that I was more nervous for his fights than I ever was for my own. Not because of him – he is a far better athlete and more committed than I ever was – but because now I was responsible for someone else. Fortunately I had that small wealth of experience to draw from and contribute something of value. I had, for once in my life, made sure I had done my all my homework the decade before. There was also just a hint of envy, I never had the opportunity to fight in the cage as all my fights took place inside a ring. But that’s okay, I need something to day-dream about from time to time on my marathon training runs. 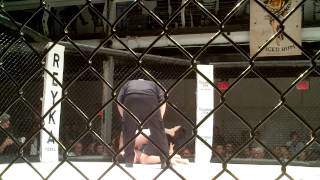