Fri May
07:28
in Brazilian Jiu-Jitsu
by Ronin Athletics Team

There is no doubt that the growing popularity of jiu-jitsu, especially Brazilian jiu-jitsu. Apart from it becoming more common among mixed martial arts fighters, it’s also gaining a following among normal people who merely want to learn how to defend themselves. This is because jiu-jitsu is a strategy in both MMA-style fights and street fights.  The primary focus being that this particular style of fighting is solely committed to mitigating an assault.  This is done by understanding the scale of danger one is dealing with in order to apply the right tactic to neutralize the attacker. 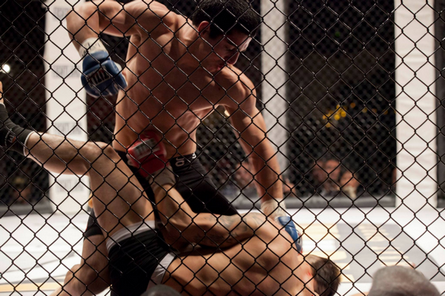 Before considering why jiu-jitsu is so effective in different kinds of fight scenarios, consider the different levels of power you can achieve from a punch. As Rener and Ryron Gracie describe in the below clip, this scale ranges from 1-10. The lower the number, the less power there is behind the punch. For levels 1-5, the growing power of the strike has more to do with the growing amount of joints the fighter can use to build momentum rather than just their physical strength.

Why Is Jiu-Jitsu So Effective?

Jiu-jitsu is not effective because it teaches you to throw more powerful punches. To the contrary, jiu-jitsu is effective because it prevents both fighters from being able to throw powerful punches. By taking the fight to the ground and grappling, this eliminates the space between fighters, which means neither you nor your opponent can get enough strength or momentum to land an extremely powerful punch that ends the fight. This eliminates the riskiest part of fighting, which is potentially getting hit with a high-level strike.

Apart from neutralizing your opponent’s ability to strike and to land anything more powerful than a Level 1 or Level 2 punch, taking a fight to the ground is also where jiu-jitsu fighters thrive. While your opponent is still trying to find a way to break free and strike in a way that hurt you, you’re positioning them into a Level 5-10 submission hold and getting ready to end the fight.

Some people may argue that jiu-jitsu violates the rules of a fight. For some reason, there is a belief that fights are supposed to take place with two people standing up, and that taking the fight to the ground is a breach of this unspoken code.

If this were boxing, that would be true. If it Muay Thai, it would also be true. However, in either an MMA-style fight, the whole point is that these kinds of rules are not part of the equation. If one fighter is able to dominate a tournament because of their style, then it’s not cheating; it’s just a technique that people need to learn to better defend against or incorporate into their own style.

Meanwhile, in a street fight, there are no rules. More importantly, if you’re fighting for your life because someone attacked you, who cares how you win? You go home, not to the hospital.

Can Anyone Learn Jiu-Jitsu?

This brings up the final reason why there has been such a surge in the popularity of jiu-jitsu: Just about anyone can do it. To become a fighter who relies on a striking technique, one needs speed, strength, agility, and endurance. Additionally, taller people are at an advantage because their range is larger, which means they can strike their opponent without having to enter their opponent’s striking range.

Learning jiu-jitsu is about learning techniques that do not necessarily require you to be in peak physical shape. You don’t have to be tall or fast to learn how to use leverage and to master submission holds. You just need the time and patience to dedicate yourself to learning a new way of fighting.

I live in New York City and I have a busy schedule, can I still learn Jiu Jitsu?

It depends.  With close to a thousand techniques, one would think you must dedicate a large portion of your schedule to train in Jiu Jitsu.  But if you want to learn enough to be prepared for the most common real life situations, you just need learn the 36 essential techniques and drill them to the point of proficiency.  Check out more of our programs to learn more.