The Slap Heard Round the World

It’s been called the slap heard round the world for good reason. There are very few stages larger than the one Chris Rock occupied while hosting of the 2022 Oscars, and there was no ambiguity when it came to what happened after he made a joke about Jada Pinkett Smith. Her husband, Will Smith, strode onto the stage, wound up, and slapped Rock across the face.

In an age where even the most rarely gets more than a 24-hour spin on the news cycle, the incident has been the subject of discussion for days and will likely continue to be talked about for months. Seemingly everyone has a take on it and hopes to impregnate it with some deeper meaning, but one of the most straightforward lessons to be learned is that you probably shouldn’t just let someone with unknown intent stride towards you without at least considering some kind of evasive maneuver.

As Gracie University Chief Instructor Rener Gracie explained recently while on Fox News’ Unfiltered with Dan Bongino, this is one of the most crucial aspects of self-defense: managing the distance. “Whoever manages the distance,” Rener said, “manages the damage that can be done in a fight.” 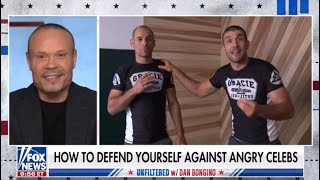 As Rener and his brother Ryron demonstrate in the above clip, the phrase “managing the distance” means establishing and maintaining a safe distance during an altercation. According to Rener, there are only two safe distances: All the way out and all the way in.

Be warned. According to host Dan Bongino, the above clip “may have been the greatest segment to ever air on television.”

All the Way Out

All the Way Out translates into two arm’s lengths. It is a distance that is far enough away from a potential assailant that they cannot land a punch or a kick. When you are all the way out, you are safely out of reach and can easily maneuver to avoid a strike, whether it’s a kick or a slap.

All the Way In

All the Way In, or the clinch, is the opposite. It eliminates the distance between you and the assailant. From this distance, you can then choose to disengage or take your opponent to the ground. Though you may get kneed or slapped when you’re all the way in, your opponent’s strikes won’t have a lot of force behind them. Because you’re depriving them of the space to build momentum, you’re depriving them of the power to hurt you.

Between all the way out and all the way in is the red zone. When you are in the red zone, you have the worst of both worlds. Your opponent is far enough away from you that they can wind up and deliver a serious blow and yet close enough so that you may not be able to get out of the way. “This is the position that can never be permitted,” according to Rener.

Staying in the Green Zone

Should the person continue to approach you and ignore the boundary you set, then you only have two options if you want to stay in the green zone. You can either back up and go all the way out or you can close the distance and go all the way in.

Unlike other martial arts, jiu-jitsu focuses on teaching students ground fighting techniques and submission holds. Because jiu-jitsu practitioners typically do not rely on strikes to win fights, and instead use moves to subdue their opponents, this reduces the possibility that someone will get seriously injured during an altercation. This is especially true should the fight goes to the ground.

As Rener shows, rather than throwing a barrage of punches, someone who is trained in jiu-jitsu can simply put the opponent into a hold that immobilizes them. If you effectively use jiu-jitsu, you can then negotiate with the assailant and neutralize their aggression. If you happened to make an impolite joke, this gives you the opportunity to apologize.

“What we love the most about these concepts—distance management, energy efficiency, the techniques of jiu-jitsu—is that it allows us to fight violence with nonviolence,” Rener says. It’s the idea of fighting fire with water and this philosophy can be applied when an officer is making an arrest, when a child is standing up to a bully, or when a comedian needs to avoid the open palm of an aggrieved husband.