The Four Elements of Jiu Jitsu

The core objective of jiu-jitsu is survival. More than beating your opponent or learning proper technique, jiu-jitsu is a form of self-defense that teaches practitioners how to survive a fight, whether it is during an MMA match or a street fight. “People believe that victory is in submitting their opponent,” Ryron Gracie said in the below clip. “This is not true. Victory is in surviving. Victory is in using only what you need to go home safely, using only what you need to avoid defeat and injury.”

According to Ryron, there are four elements to jiu-jitsu to help ensure your survival when you are under attack. They are: 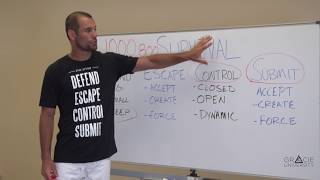 The above video explores how these four elements all complement each other, but they can be broken down into smaller elements that we’ll explore below.

As Ryron and his brother Rener note, there are three tiers of defense positions: 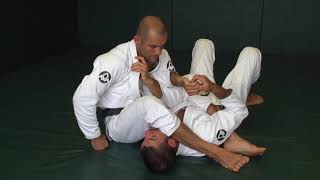 As an example, if your opponent wants to catch you in a rear naked choke, they first need to mount your back, then use their arm to encircle your neck, then gain the leverage to apply pressure and complete the move. Taking your back is the big position. If you prevent them from taking your back, then there is no way they can complete the move. If your back gets taken, then you have to prevent your opponent from getting their arms around their neck. This is the small position. If you lose the small position, you are then in deep trouble. That means you have to fight the to keep from losing the deep position. If you lose the deep position, you lose the fight.

The most important thing to remember about defense is that it is better to defend early than to defend later. Put another way, defending is about options. The more options that you have, the better you will be able to defend yourself. The fewer options you have, the fewer opportunities you will have to defend yourself, to escape, to assert control, and to force submission. Like a game of chess, you need to always be on your guard and recognize when your opponent is trying to take away your options and to corner you into checkmate. Excellent fighters maintain their composure and presence of mind, and they focus on not giving up the position at hand.

Escaping is a combination of active techniques and recognizing the mistakes of others. Ryron and Rener break it down into three components: 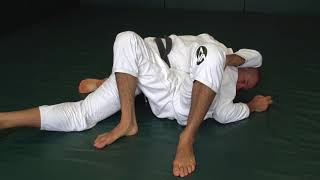 Accept a mistake when you see it. If your opponent focuses too much on a specific attack and leaves you an opening, take it. Don’t overthink it. Just move. You can also create an opportunity for an escape, which means pushing your opponent to make a mistake that you can then exploit. Finally, you can force an escape. This does not mean using brute force to overcome your opponent. Rather, you are using an explosive move and expending energy to disorient your opponent, thereby giving you a chance to escape. Because forcing an escape requires a lot of energy, it should only be used as a last resort.

Once you’ve escaped and moved into the top position, you can then control the fight in three different styles: 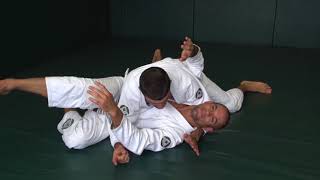 Closed means that you are restricting your opponent’s movement and using a lot of holds. Maintaining a closed form of control can require a lot of energy and stamina to keep it up, but it is very effective. Contrary to this method is the open form of control, which is more about using body weight and leverage rather than brute strength. Finally, there is dynamic control. Dynamic control means using a combination of strikes, holds, and moves to keep your opponent disoriented and on the defensive. Dynamic control is not about overwhelming your opponent with force, but with such a large variety of techniques that they don’t see a clear way to mount a counterattack or escape.

Forcing a submission is very similar to escaping because you want to exploit your opponent’s mistakes as much as possible rather than expending your own energy because this can tire you out and potentially lead you to make a mistake. Like escaping, the three components of submission are: 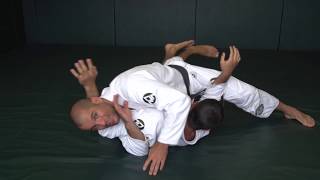 Accept a mistake when you see it. Particularly among inexperienced fighters, those who are in danger of losing the fight will likely become emotional and irrational. Furthermore, if they have already failed to make you submit, to contain you, and to prevent you from gaining control, that means they’ve already lost three times and they are more than likely exhausted. Even among more experienced fighters, this is when they are most likely to slip up. You need to accept that mistake and take the submission. In other fights, you may need to use a combination of attacks or moves to create an opportunity where your opponent makes a mistake. If your opponent does not make a mistake or you cannot create an opportunity, you may have to force a submission by relying on an explosive move or brute show of force. Again, this needs to be a last resort because expending too much energy can leave you vulnerable to counterattacks.

Finally, one of the most crucial things that Ryron discusses is the importance of patience and seeing that these four elements work best when they occur in sequence. If you are thinking about escaping before you think about defending, you will make a mistake and find yourself increasingly boxed in. If you try to force a submission before you’ve established control, you will give your opponent a chance to escape. By maintaining your composure and fighting methodically through the sequence, rather than treating submission as an end in itself, you will accomplish the core objective of jiu-jitsu; you will survive.