The 5 Most Common Injuries in Brazilian Jiu-Jitsu

We’ve taken a very informative 50-minute video where Rener Gracie and Alex Ueda explains the most common injuries when training in Jiu Jitsu and broke it down into two parts. The first part looks at the five most common parts of the body that get injured during Brazilian Jiu Jitsu sparring sessions. The second part looks at what all five have in common and how a single underlying cause may be responsible for making them happen far more frequently than they should. Enjoy!

Before launching into the first part of the post, it’s important to note that there are two distinct types of injuries that happen in Brazilian Jiu Jitsu:

The first type of injury can be extremely painful, but the damage is localized. These injuries also heal relatively quickly. When you pull a muscle in your back, for example, it’s your back that hurts. With proper care, this type of injury can heal within a matter of weeks or sometimes months.

Injuries to ligaments, tendons, or nerves

The second type of injury is far more serious. In some cases, these injuries happen in an instant, as is the case when someone hyperextends their knee and they tear their ACL. In other cases, the initial injury may not be that painful, but it can lead to a more serious injury if it is not given time to heal.

As Rener Gracie mentions in the video below, this type of injury happened to him. After a match, he felt a pain in his leg. At first, he thought it was a minor quadricep injury, and that he would be able to train through the pain. In time, the pain became so bad that Rener could barely walk. When he finally did go to a doctor, he learned that his leg was fine. What had happened was that he had herniated a disc in his spine, and that disc was compressing the nerve that ran down his spine and into his leg. Even worse, the inflammation had become so bad that surgery was his only option.

Following the surgery, Rener had to spend 10 months off the mat rehabilitating. Had he recognized that it was a nerve injury, and not a muscle injury, he could have stopped training, rested, and bounced back in a fraction of the time.

The lesson to take away from this: Being too tough for the doctor will ultimately sideline you from training and fighting.

The 5 Most Common Injuries in Brazilian Jiu-Jitsu

From Rener Gracie’s experience, lower back injuries are the most common injuries in BJJ. A lot of BJJ fighters use the muscles within their pelvic area when fighting, particularly when they are on the bottom in full guard. If someone is significantly bigger than them and pushes their body in an awkward manner in this position, it can very easily lead to a pulled muscle in the lower back or cause a disc in the spine to slip out of place.

Neck injuries are also very common in BJJ. This happens when fighters end up in an awkward position while being deep stacked, when they are attempting to break free from a headlock, or when they post with their head to avoid getting rolled.

If an injury happens, it’s vital to quickly determine if the injury is muscular or if a disc has slipped out of place. If the injury makes it difficult to turn the neck, it’s likely a muscle injury. If the injury is followed by tingling or shooting sensations down the arm and into the fingers, it is likely nerve damage due to a slipped disc.

As mentioned above, nerve pain is far more serious. Anyone experiencing these symptoms should immediately stop sparring and see a doctor.

Muscular injuries can be painful, but they tend to heal relatively quickly. Tear to the ligament can be far more severe. If the tear is partial, that means the fibers are still connected and that healing is possible with rest. In the case of a full tear, the ligaments have been severed and will not be able to fuse back together without surgery. This can mean to months, if not years, of rehabilitation.

Shoulder injuries can happen when fighters don’t keep their elbows close. If they are hanging loosely at the sides, this leaves the fighter exposed to being rolled by an arm attack. If the fighter resists, this can put a lot of pressure on the shoulder and in some cases can lead to injury. Similarly, if a fighter shoots too aggressively, and their opponent sprawls out too far, this can result in a lot of weight and force squarely falling onto the shoulder.

Cauliflower ear pretty much inevitable if you spend your days grapping. More than anything else, it’s the easiest way to pick a BJJ fighter, MMA fighter, or wrestler out of a crowd. However, it is possible to prevent cauliflower ear from getting out of control.

The most gnarly cases of cauliflower ear don’t happen all at once. They start when someone tears the cartilage in their ear. This can happen when one smacks the mat too hard or they ram their ear into the side of an opponent repeatedly. This causes blood to rush into the ear. Without proper draining, this blood eventually solidifies. 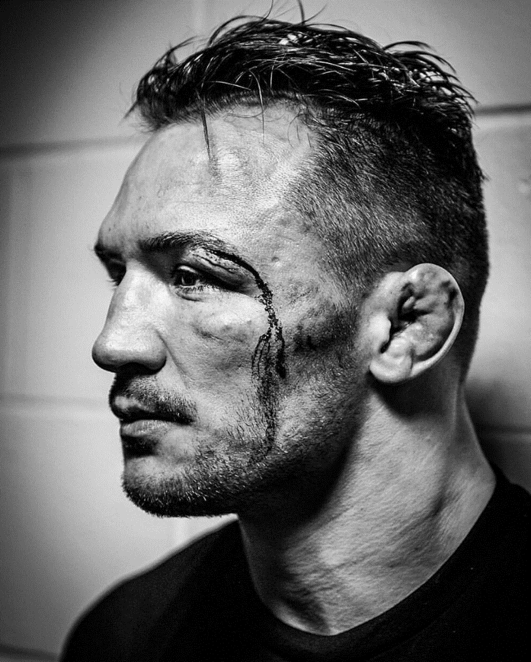 At first, it is not very noticeable. It’s just a bit of character. If the ear is not drained, however, the blood hardens, and then blood from subsequent injuries hardens on top of that. It grows larger and larger, almost like a hideous, alien callus.

To avoid serious cases of cauliflower ear, you have three options.

This third point is not only important for avoiding the scourge of cauliflower ear. It’s also important advice to help keep the lower backs, necks, knees, and shoulders of everyone on the mat healthy and safe.

If you look at the reason behind most injuries in BBJ, it’s not because of the inherent violence of fighting or because someone doesn’t know technique or because some fighters don’t know their own strength. It’s because fighters’ egos push them be more intense and more aggressive than they need to be.

More than just being symbolic of either your partner’s or your own ligament, tendon, or muscle, the lesson here is to recognize that sparring sessions are meant to be training exercises. You should be focused on improving technique, not dominating your opponent.

Fighters need to be in control of their egos and to know when to ease off. This may not prevent every injury, but it will help far more fighters stay healthy.

The Importance of Ego Control

Ego control gives you the ability to recognize that you are fallible. Your opponents may sometimes get the best you. You can lose.

This is especially true with your sparring partner. Even if you consider yourself a master and your partner a beginner, they may surprise you and put you in a hold that you weren’t expecting. You then have two choices:

Those who opt for the first choice while sparring may scar their ego a little bit, but they will quickly be able to get on their feet once the session is over. They will fight another day. More importantly, they will likely be able to train consistently and remain at the top of their game because they won’t be frequently sidelined by injury.

Those who opt for the second choice may be able to keep their pride intact, but they risk losing control of the situation. Because they treat even a sparring session like it’s a title fight, they are more likely to pull that rubber band to the snapping point, which means potentially injuring themselves or their partner.

Ego control extends to knowing when not to fight. For those who have suffered an injury, the best medicine is to rest and to not spar with anyone while you are in the initial stages of nursing a major injury. Rather, you should be coming to class, taking notes, and learning from others. As you finish rehabilitating and return to the mat, it’s important to take things slowly. If your body is not 100%, you should not try to train at 100%.

Avoid positions that may aggravate the injury. For example, if our lower back is injured, avoid back mount and closed guard. Avoid bridging from the bottom of the mount. If you have a neck injury, don’t try to post with your head to avoid being rolled. If you have a shoulder injury, tuck your injured arm into your belt so you can roll more easily and avoid reflexively trying to post with your injured arm.

Perhaps more importantly, make sure you are comfortable with your partner. This means two things. First, you should consider sparring with someone who is either close to your size or slightly smaller than you. Second, it means being sure your partner is someone with whom you have a good relationship so you can ensure things don’t get too aggressive.

Finally, always remember what Rener’s grandfather, Hélio Gracie, frequently asked his students: “When is a sparring session a matter of life and death?”