From an outsider’s perspective, jiu-jitsu may look like a lot of grappling and complicated chokeholds. To the white belt who may have spent just finished their first week of classes, they may not feel all that different. Performing certain moves can require more than a dozen steps and learning how to employ these techniques fluidly and effectively can take years of practice. As one gains a greater appreciation for the amount of dedication, knowledge, and skill that goes into becoming a great fighter, one is likely to gain a greater appreciation for why jiu-jitsu is called a martial art.

The Art of Jiu-Jitsu

Other forms of art require similar amounts of dedication, knowledge, and skill. Virtuoso musicians spend decades practicing scales and learning chord formations. As another example, master chefs spend hours each day in the kitchen learning how different ingredients interact with one another and perfecting recipes. In addition to showing dedication, acquiring knowledge, and constantly practicing and improving their technique, they also inevitably begin to add their own personal touches to their work. They begin to deviate a little bit from the example they were taught, and they learn to use their foundational knowledge of the principles to improvise. This is the core of artistry.

Jiu-jitsu is no different. Mastery does not come from knowing every step to every move. Mastery comes from understanding the principles of the art, and then modifying those principles and moves in different scenarios and against different opponents. By constantly working to modify these moves and adding their own personal touches, students not only demonstrate a certain level of artistry—they also begin to recognize theory and the principles that govern it.

Taking a principle-based approach runs contrary to a memory-based approach. While memorizing moves can help teach students the basics of jiu-jitsu, it can also be an obstacle to growth. Students who have committed moves to memory, but don’t have an inherent understanding of the principles of jiu-jitsu will be at a disadvantage when they are caught off guard by a move they’ve never seen before or a fighting style they’ve never gone up against before. This is why students are encouraged to work with as many partners as possible and to reimagine different fight scenarios. It doesn’t just give them the opportunity to practice the moves they’ve learned in class, but how to apply them in the real-world. It also gives them an understanding of the underlying theory that makes the moves so effective.

The 32 Principles of Jiu-Jitsu

Theory has always been a crucial part of jiu-jitsu, but it often taken a backseat to experience-based learning in the gym. The principles that we’ve been discussing are implied in the lessons rather than explicitly stated. However, when the COVID-19 pandemic made in-person learning impossible, this forced Rener and Ryron Gracie to start consulting with other prominent members of the Brazilian Jiu-Jitsu community virtually, and they began devising lesson plans that were more theoretical and focused on clearly identifying the principles behind jiu-jitsu. This ultimately led them to recognize 32 core principles.

Initially meant to be part of the lesson plan for students who were going from purple to brown belts, the Gracie community realized that this knowledge and this principle-based approach could be helpful to anyone, not just advanced students. 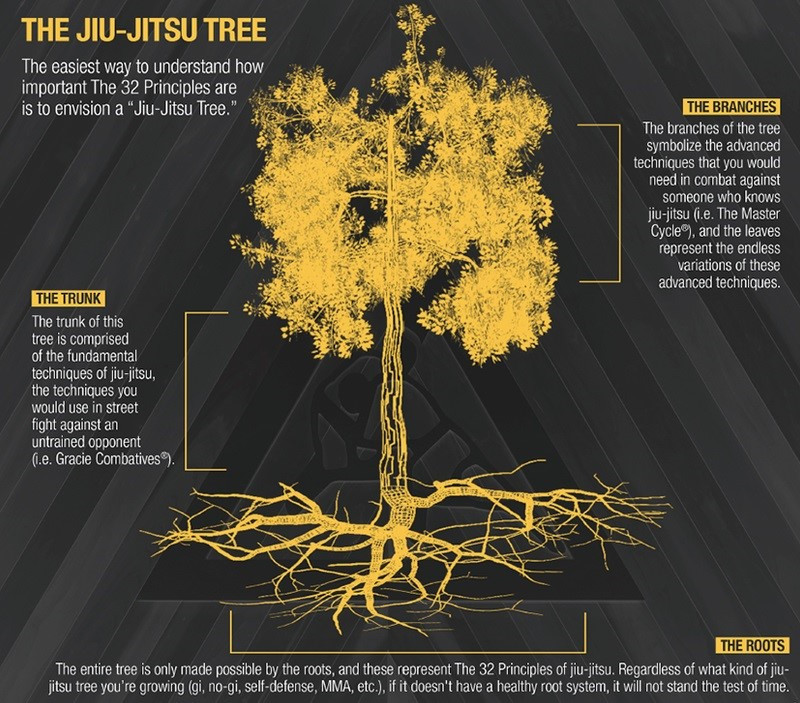 In the above video, Rener uses a tree as an analogy to better present the idea of jiu-jitsu conceptually, though a similar analogy could be applied to any form of art. In this metaphor, the trunk is the foundational techniques that you need in a street fight with someone who is not trained in jiu-jitsu. As anyone who has gone through the Gracie program can guess, these are the 36 principles of Gracie Combatives. The branches are the refinements and more experienced moves that one learns as their jiu-jitsu journey continues. They are the techniques that experienced jiu-jitsu fighters rely on when going up against an opponent who has also studied jiu-jitsu and is no longer a beginner. Once you move to the leaves of the tree, this is where individual variations come into play.

As much as we may think of the tree as only being composed of parts that we see (its trunk, branches, and leaves), the health of the tree is determined by its roots. The 32 Principles represent these roots, and the deeper they are, the stronger one’s understanding of jiu-jitsu can become. Furthermore, those roots can start growing on day one. Even white belts who are just beginning their jiu-jitsu journey can benefit from learning the 32 Principles.