Surviving the First 6 Months of Sparring

Sparring, also known as rolling, is what makes Jiu-Jitsu the most dynamic and effective martial art around the globe. Furthermore, it offers the opportunity for limitless growth. In other words, Jiu-Jitsu promotes constant sparring, which enhances one’s skills. Unfortunately, most people quit before they hit the 6-month mark in the academy because of sparring. Anyone sparring for the first time rank the experience as demoralizing, discouraging, humbling and painful. Students tend to quit Jiu-Jitsu in the first 6 months because their classes are not handled correctly. However, there is no need for concern because Gracie Jiu Jitsu® offers a new approach to help a trainee survive the first 6 months of sparring.

Rener and Eve Gracie propose delaying sparring to give new beginners the opportunity to learn a few skills and expertise. However, Jiu-Jitsu academies are run differently and instructors have their own of teaching as well. Besides, students are also different; there are those white belts who prefer to jump knee-deep into sparring, other white belts prefer gradual growth. But what happens if you find yourself in a school that introduces sparring immediately in the first 6 months of training? Rener and Eve offer excellent tips that can help one avoid feeling discouraged, demoralized, defeated, pain and every session always encouraging them to call it quits. 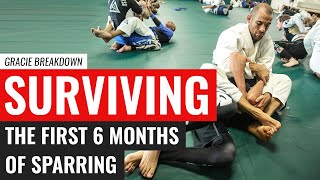 The harder the wood, the heavier the hammer…

Having all these in mind, a white belt can survive the first 6 months of sparring and enjoy it thus prompting them to want to learn more. And you are right! Anyone can benefit from these tips, be it a beginner, a purple belt or a black belt and instructors alike. Any belt level, academy and even other martial arts sports that employ similar techniques can benefit from this approach. The concepts Rener and Eve discuss are aimed at making you a better practitioner, instructor and academy. Creating this type of training environment in your academy will attract more students to it and ultimately keep a lot more people in Jiu-Jitsu!

Sensei significance over smasher significance is a major success factor in the first 6 months of Jiu-Jitsu sparring. Giving higher belts significance makes the learning process more productive, since their most important role during training is usually to “defend the belt unless you give them a more important role.” Even though the primary nature of Jiu-Jitsu is to go up the belt ranks, a blue belt can turn a purple belt, who is designed to smash a blue belt, into an ally. In other words, a white belt needs to give a higher rank permission to help them grow – make them the instructor you need. However, this depends on how you ask for a sparring partner; be the driver of the whole process and always ask questions that will ensure growth.

The Three Phases of Progress

In your first 6 months of training, your primary goal should be survival and not the number of taps you achieve. There are three phases during the first 6 months of training that one can use to measure their progress: observation, prevention and application. Being observant allows you to recognize the pattern of movements and techniques experienced belts use; this, coupled with advise from your instructors, then allows you to know what you need to do to prevent an armlock, a chokehold, a side mount, a scissor sweep, a scarf hold, a back mount and so on. Accordingly, being able to observe what happens and how to maneuver these techniques to prevent tapping out then gives you the opportunity to apply them. You can survive the first 6-12 months in any Jiu-Jitsu academy if your focus is on survival rather than the number of submissions you achieve.

Finally, always be grateful to your instructor or sparring partner. For example, Rener admits that showing gratitude and appreciation gives him that inner fulfillment and motivates him to want to teach someone more. Gratitude makes even a black belt want to make a white belt more productive and effective thus helping them grow during their first 6-12 months of joining an academy.

The right time to appreciate sparring

Beginners can learn a lot about their Jiu-Jitsu during sparring. However, Rener and Eve propose separating technique classes from sparring classes. The right time to start sparring is when a novice can appreciate the hard and grueling spars with more experienced belts.