Fri May
08:51
in Mixed Martial Arts
by Ronin Athletics Team

Why are martial arts good for adults?

We typically think of martial arts training that is something incredibly beneficial for children – and rightfully so, but those benefits are not exclusive to children as adults often stand to gain for more from martial arts training than children actually. But first, let’s look at the benefits that we would share in common – increased health and fitness. There’s a great saying that goes, “We don’t stop playing because we grow old, we grow old because we stop playing”  As technology advances and seeps into our every day routine, creating unbeknownst conveniences in the many facets of our lives, we (people of all ages) have become used to an increasingly sedentary lifestyle, which is one of the major causes of our modern society’s health ailments. The other common benefit of a serious martial arts practice are the physical skills needed to defend oneself, which in turn leads to a certain confidence and peace of mind.

This is huge with children and the current epidemic of bullying in schools. Unfortunately, bullying is no longer limited to physical harassment, as our current culture has us connecting and interacting through various social media platforms on a daily basis, there’s also a major psychological and emotional component to bullying in the modern age. This type of harassment is alarmingly more prevalent in the digital age, but also transcend demographics and can manifest in adults – like for example in a competitive or high-pressure work environment. Martial arts help you deal with physical aggression, by teaching the physical skills and tactics to safe guard your well-being … this in turn provides the confidence and the blueprint to deal with all different forms of aggression that an adult may have to deal with, whether its in a heated meeting or in traffic or similar confrontation. 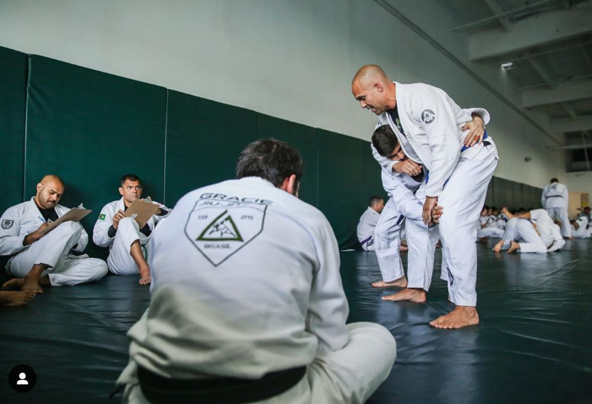 Along the same lines, one of the greatest benefits of martial arts training for adults is stress relief! As adults, we have obligations and responsibilities, both personal and professional that likely dwarf anything we ever experienced as children. Far too often there aren’t enough outlets available to relieve this pressure as effectively as a high intensity physical workout, based on simulated hand to hand combat. When performed in a safe setting and with a group of healthy, kind, and like-minded individuals, there is often nothing better for the average adult’s overall well-being than martial arts training and the often over-looked component of comraderie and community that provides a solace for the fast paced world that most modern professionals tend to find themselves in.

What is the best martial arts for beginners?

My gut response to this is the same as my response to the ideal diet or workout routine. Which is to tell you that whichever one works for you, whichever one you can keep up with meaningful consistency is the best martial arts for you. Another popular politically-correct (polite) reply would be to say that “There is no BEST martial art”

But to really get to heart of a useful reply we have to look at what exactly derails most beginners attempts to practice martial arts. While many factors come into play here – cost and convenience of location being valid ones, let’s look at two others that speak to the overall product and student experience, namely safety, and structure. One of the major reasons most beginners drop out of training is due having suffered and injury. If you are new to physical culture in general or martial arts in particular, it may not be in your best interest to start in martial arts that are known to be high intensity or are devoid of the structure and agency necessary to allow the novice to self-calibrate the intensity and contact. Unfortunately, many of the striking arts are often guilty of this, catering their training to the most athletic or physically gifted. Taking a one size fits all approach to martial arts training can often leave the majority of us behind. 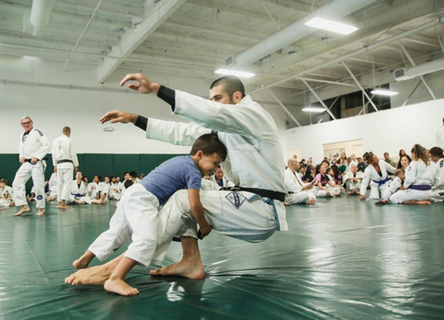 By contrast, a martial art like Gracie Jiu-Jitsu®, which is based on principles of leverage and timing, with goal of developing effective self-defense in mind, as opposed to high-level athletics competition or tournaments, will have more to offer a wider range of demographics in a safe and structured manner, that is flexible enough to allow the student to tailor the practice so it remains challenging while minimizing the risk of injury. In that sense, Jiu-Jitsu is like a fancy suit that we can tailor to fit our own individual goals and bodies (but only if taught and presented in the right manner)

This leads us to structure itself – part of the appeal of martial arts training is getting lost in the journey and discovering the depth of the art through practice. Jiu-Jitsu is perfect for this as its often labeled as human or kinetic chess. It has many layers filled with personal training milestones to keep you motivated and on track. The goal is to enjoy the process. There’s a reason you don’t see Checkers Clubs as opposed to Chess clubs. Once the basics are mastered in a safe manner, the deeper practice of Jiu-Jitsu turns every training partner into a different riddle to solve, and if conducted in a healthy environment, your training partners become people you work with to improve yourselves, as opposed to rivals who are constantly trying to stifle one another. Jiu-Jitsu will provide the beginner with the opportunity to develop real skills and see what’s available beyond the tangible by also teaching them to enjoy the process.

What fighting style should you learn first? 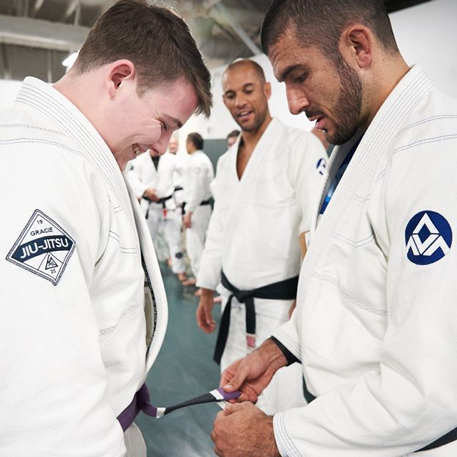 I have a bias for the Jiu-Jitsu and the grappling arts in general. They are the universal language of human combative movement. While we may immediately think of punching when we think of two people fighting, that may be how the fight starts, but if neither combatant lands that perfectly timed, training cultivated, powerful punch … they invariable end up in a clinch and standing grappling situation and will either continue to ineffectively strike at one another or immediately transition to the ground. When talking about two people who are only focused on striking each other, they will still end up grappling, despite their goals to the contrary (since your explosive power is massively   usually be in a sloppy fashion. If you doubt this, just tune into any boxing match and take note how many times the fighters end up clinching. This will happen after failed attempts to land that perfect knockout blow or in more dire circumstances, they will purposely seek refuge in the clinch in instances where they have been hurt by a punch or reached a point of fatigue that will compromise their ability to defend themselves.

The irony is that grappling is so prevalent in the arena where the athletes are paid to (and agree to) keep a respectful and game distance from one another that you only need to see that there is always a third person in the ring to enforce this major rule. The clinch just happens when two people are trying truly hurt one another and in that heated environment, grappling is an undeniable reality.

However, intense circumstances withstanding. If you were two observe to toddlers playing with one another (and this can go for various species in the animal kingdom, not just humans) you will invariably see them grapple as a form of tactile socialization. They’re playing or even “rough-housing” – The point is that this inclination to grapple is truly a universal instinct, one that is shared by most mammals. Whether your perspective is influenced by the pragmatic evidence of grappling’s prevalence in real fights or the universal cognitive inclination to use and develop these skills, any one of the major grappling arts – Wrestling, Brazilian Jiu-Jitsu, Judo, Sambo – would be a wise investment to make as your first foray into martial arts and will ensure a solid foundation and fluency in this universal tactile language.