Bullying is a major problem in the United States. It takes a massive toll on the physical and psychological wellbeing of kids from elementary school to high school and it can oftentimes lead to extremely violent and tragic events.

In a perfect world, there would be no bullying. There would also be no reason to resort to violence to resolve issues. Unfortunately, this is not the case. Bullying does exist and violent events do happen—including fights. 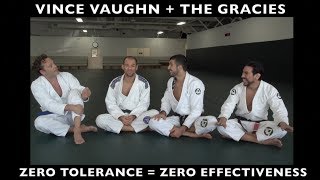 In an attempt to stop both bullying and violence among students, many schools have instituted what are known as Zero Tolerance policies. These policies punish anyone involved in a physical altercation equally. To prevent fights and bullying, However, as Rener Gracie, Ryron Gracie, Sam Fernandez, and Vince Vaughn (yes, that Vince Vaughn) note in the above clip, these policies frequently do not work as intended. In fact, they may actually make bullying worse.

While these polices have the laudable goal of preventing violence, what they oftentimes end up doing is handcuffing kids from defending themselves. By punishing aggressor and victim the same, this means victims of bullying feel as though they cannot retaliate and must silently endure the bully’s abuse.

A Rock and a Hard Place

Zero Tolerance policies put the victim in an impossible position, especially if they face verbal attacks and other forms of humiliation that do not leave behind physical evidence of bullying. If victims do not fight back, the bullying continues. If they do fight back, they get in trouble at school and at home. In either case, the victim loses out.

Additionally, these policies ignore the fact that bullying behavior tends to remain below the threshold of the Zero Tolerance policy. They push, they prod, they tease. They also tend to escalate when the abuse is not met with resistance. Bullies tend to push the envelope more and more, and the taunting tends to increase in degree of cruelty. As it becomes more severe and persistent, victims may begin to show signs of psychological distress. They may lose interest in activities, start doing poorly in school, or develop symptoms of depression.

In a pattern that tragically has become all too familiar, the situation can become so toxic that the victim may feel as though they have to resort to extreme measures to get the bullying to stop.

How Jiu-Jitsu Can Prevent Bullying

It’s important to remember that bullies are opportunists when it comes to choosing their victims. When they believe they can get away with pushing someone around, they will do so. Should a bully fail to intimidate an intended victim, they will likely move on and the bullying behavior will not have a chance to take root. If it does not take root, then it cannot escalate.

Of course, just telling a bully to buzz off doesn’t always work. Confidence is key.

This is where jiu-jitsu comes in. More than being a style of martial arts, jiu-jitsu empowers those who learn the discipline to develop self-confidence. When kids recognize strength in themselves, they will project it and others will pick up on it. When they know they have the ability to defend themselves, they will be able to assuredly stand up for themselves. 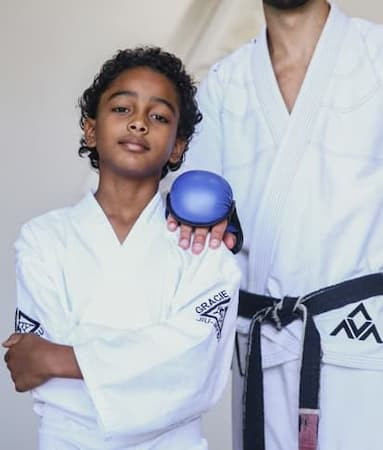 Another benefit of jiu-jitsu is that it can actually minimize injuries sustained while fighting should a physical altercation happen. This sounds counterintuitive, but it’s a matter of physics.

For younger children, physical fights may result in a few cuts and bruises, but no serious injuries. There are two reasons for this. First, the kids smaller and lack the strength to seriously hurt one another. Secondly, they tend to be close to the same size.

Both of these things change as kids enter puberty. On top of becoming larger and stronger, the height and weight differences between kids also gets more significant. This can lead not only to unfair fights but fights in which someone can get seriously hurt because the kids are larger and stronger. They can throw punches that can result in significant injury.

Unlike other forms of martial arts that rely on striking, jiu-jitsu is a form of self-defense that is based on holds and other tactics to force an opponent into submission without punching or kicking them. Rather than fighting fire with fire, jiu-jitsu fights fire with water. In the context of a physical altercation at school, it means placing the other student in a hold. They can then maintain this hold and control over the situation until help arrives.

Even if both kids end up getting in trouble for violating the school’s Zero Tolerance policy, they walk away with bruised egos instead of broken bones. This is what is most important.

Gracie Bullyproof® is a jiu-jitsu program specifically designed for kids. At the core of the skills it teaches is the ability to be assertive and to act with confidence to prevent bullying before it begins. Ultimately, the Bullyproof program is not just about learning self-defense, it’s about developing self-confidence. It also walks students through scenarios to prepare them for real-world situations where they learn how to recognize a friend from a potential bully; how to respond to peer pressure; how to stop bullying before it begins; and how to neutralize aggressive behavior in a way that minimizes injury.