How do Jiu Jitsu Belts Work?

Wed May
08:26
in Brazilian Jiu-Jitsu
by Ronin Athletics Team

Even before starting jiu-jitsu, just about everyone has a general idea of how the belt system works. In the most basic terms, belts symbolize skill level and rank. White belts represent those who are new to jiu-jitsu. As they develop as fighters and demonstrate their increased skill level on the mat, they are awarded new belts. In addition to demonstrating better technique and more skill, it also becomes increasingly more difficult to attain new belts or, for black belts, degrees.

An overview of the adult belt system in the Gracie School looks like this:

Many myths are associated with where the black belt come from. In the old days, one story goes, students all had white belts. Through years of work and practice, the belts would become dirtier and dirtier. Eventually, they became black. In this story, the blackness of the belt is symbolic of the years of commitment one has to dedicate to achieve this level of mastery.

As Valente explains in the below YouTube clip, the original belt system was developed by the father of judo, Jigoro Kano. When his school, the Kodokan, was founded in 1882, he did only have two colors of belts—white and black—but the distinction between black belts and white belts was not as extreme as it is today. Students began as white belts and were then awarded black belts after learning the fundamentals of judo. As fighters learned and demonstrated more skill, they were advanced into higher degrees of black belt. 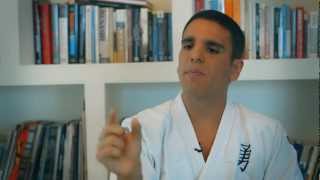 The colored belt system that we have come to know was implemented by a Japanese judo instructor named Mikonosuke Kawaishi while teaching in Paris. Kawaishi specifically designed bright colors to appeal to younger students whom he felt needed more tangible rewards to stay motivated.

When the Gracie Academy (or Academia Gracie de Jiu-Jitsu) was founded by Carlos and Hélio Gracie in 1952, they returned to the original two-color belt system, but with a twist. In their original model, all students, regardless of skill level, wore the white belt. All instructors wore blue belts. For those who were in the process of earning their teaching diploma, they wore light blue belts. Those who had been awarded their diploma by Grandmasters Carlos and Hélio wore dark blue belts. There were no black belts.

Belts After the Creation of the Jiu-Jitsu Federation

In 1967, the Jiu-Jitsu Federation was founded to make jiu-jitsu a sport and to establish rules, regulations, and a point system. Before this time, there were only three ways that a jiu-jitsu match could end: submission, knock out, or draw. Since most fights were challenge matches without time limits, this meant that they only ended one of two ways: tap out or knock out.

In addition to creating the point system, the Federation also implemented the colored belt system that we recognize today. They also designed what is known as the bar system to differentiate jiu-jitsu from other martial arts. At that time, the highest belt that a fighter could achieve without being an instructor was the black belt with a white bar. The solid red bar was for instructors in the process of becoming professors. When they received their diploma, they would then get the two white boarders around the red bar, which symbolized professorship. In fact, only professor’s belts contained stripes for many years.

Hélio Gracie and the Professor Course

When training professors, Hélio Gracie paid close attention not only to fighting skill, but also what could be called moral virtues: courage, benevolence, wisdom, honesty, and patience. For professors to even be eligible for advancement, they had to remain at their rank for at least two years.

According to Valente, “he believed in observing the person in different situations, and he felt that it took many years before you could actually see what the person is really made of inside.”

In addition to creating an adult belt system, the Federation also created a youth belt system. Hélio believed that people under the age of 16 were too immature to achieve the level of moral virtue necessary to qualify for the adult belts, so he created a separate system includes white, yellow, orange, and green belts.

Similar to Kawaishi in the early 20th century, Gracie Jiu-Jitsu created the mixed belt system in the early 21st century to give more promotions to kids in order to keep them motivated. In this system, there are belts that are solid colors, as well as mixed color belts that indicate students are between belts. Students graduate from white to white-yellow, to yellow, and so on.

According to Valente, Grandmaster Hélio Gracie approved the new system in 2005, who said it was the most effective way to give kids self-confidence.

Gracie Univesity’s belt ranking system differs from other BJJ Academies.  Where most BJJ Academies rank their students simply based on competition results.  Gracie University promotes their students based on mastery of techniques that demonstrate competency in reality-based self-defense scenarios.  This is confirmed by testing the student’s knowledge of the Gracie curriculum; which are carefully curated sets of techniques and principles that are proven to address high probability assault scenarios identified by the Gracie family over the course of their 100 years of development.

How to tie the Jiu Jitsu Belt.  Rener Gracie’s 3 variations. 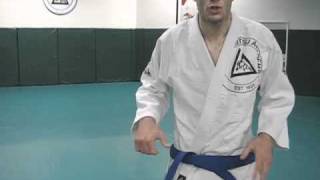