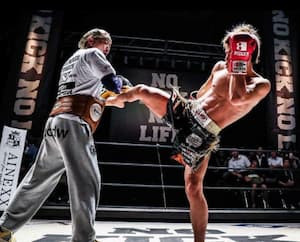 Kickboxing at Ronin Athletics is divided into two sections, a 101 class for beginners and a 201 class for more advanced students. For both classes, we focus primarily on teaching students the technical elements of kickboxing, not just how to win in a fight.

This non-competitive approach does require striking exercises with a partner, but they are done to ensure that all students understand the basic buildi

ng blocks of kickboxing, the rules of the sport, and the rhythm of a fight.

The overarching principle that guides our program is to help develop an understanding and proficiency of movement, distance management and timing. There’s a rhythm to Striking-based martial arts that incorporate these three facets at its core.  While the flash of Kickboxing may appear to be the combination of kicks and punches (and the occasional flying knee), it’s the ability to move effortlessly and throw these beautiful combinations, that set a skilled practitioner apart from one that’s only interested in punching a bag to burn calories.

Our classes will teach the novice to throw combinations of punches and kicks against a partner holding striking pad/mitt, while shifting direction in between.  This format is designed to not only challenge your ability to throw the punches properly, but to also rebalance yourself to throw the combinations again from a different angle.

Students will sweat and get a great cardio workout, but our courses place a greater emphasis on teaching the dynamics of fighting rather than burning calories. Students are expected to learn striking techniques and to practice them with a partner. This means hitting the mitts and it means holding the mitts rather than hitting a stationary punching bag.

This is not a serious sparring contest, however. We keep the intensity down and focus on making sure that our students maintain proper form and become more comfortable anticipating the attacks of others. This makes them faster, stronger, and more agile, which then allows them to have a more dynamic and collaborative sparring session when they are ready.

As a means of analogy, imagine a volleyball scrimmage. All the people playing against each other are on the same team; they have just divided into two opposing squads. The goal, therefore, is not to spike the ball whenever possible or to rack up points, nor is it to sleepily lob the ball from one player to the other. The goal is to play at a high enough level of intensity to challenge the other players and to allow them to become better players.

What style of Kickboxing do you teach?

Our Head Coach and Founder, Christian applies a blend of the striking Martial Arts that’s influenced the successes in his competitive fighting career in: Mixed Martial Arts, Kickboxing and Boxing.

Our program is unique in that you’ll find the concepts, techniques and training methods from:

Our classes are predominantly partner based.  Fighting follows the same training paradigm to ballroom dancing, in that you can only only benefit when practicing with a partner.  The fight (much like the dance) is a constant exchange of energy.  By pairing up with a partner, the practitioner develops both their defense and offensive skills constantly at play during the session.

Partners will alternate roles between each iteration.  One will play the offensive (striker) and the other defensive (pad holder).

Fighting has similarities to playing an instrument.  Punches are typically named or numbered: Jab (1), Right-cross (2), Left-hook(3) and Round-house Kick.    Like playing a chord on a guitar, you don’t need many chords to play a nice melody.  With knowledge to 3 basic punches and kick, one can put together a beautiful combination of strikes. Now enhance it by varying the speed and rhythm to each strike, while incorporating movements and you have yourself a beautiful composition with your partner. 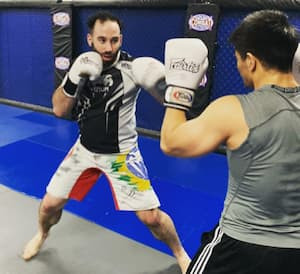 Our classes typically start you off with basic striking combinations and gradually applying a new variation with each iteration.  By the end of the class, you’ll be putting together combinations that challenge you mentally and physically.

Hand Wraps – elastic cotton cloth used to wrap the hands and wrist, to strengthen the joints, digits and knuckles when striking defensive gear.  This is worn inside the Boxing Gloves.

Boxing Gloves – Typically 12-14 oz in weight, with Velcro straps for ease of tightening and release when taking turns during drills with a partner.  This is used to protect the hands during the class training session.

Mouth Guard – used as protection against teeth and jaw injury during sparring drills and free-style sessions.

Kickboxing May Round Out Your Game

Though the kickboxing program at Ronin is not designed for fighters training for competition, some may find classes at Ronin useful if they are new to kickboxing. Unlike some gyms that focus primarily on teaching through sparring sessions, classes at Ronin are more concerned with proper striking technique. This includes teaching: 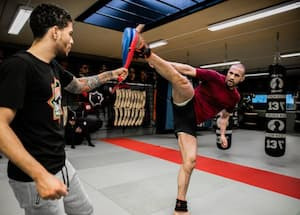 By learning these elements of kickboxing, in a collaborative training atmosphere, this gives students the necessary skillset they need should they decide to take their fight training more seriously.

For those who have a background heavily influenced by grappling, wrestling, or Brazilian jiu-jitsu, these classes can allow fighters to become more well-rounded. On top of learning striking concepts, students will also gain a greater appreciation for the fighting distance and timing of Kickboxing and have a better idea of how to defend  a fighter with a background in Striking-based Martial Arts.