Kickboxing: before and after

Kickboxing is a multifaceted martial art that originated back in 1960. There are several types of it – Japanese, American, as well as multiple solo compositions. If you look closely at the movements and actions of kickboxers, you will notice that they contain details from Wushu, Karate, Muay Thai, and Taekwondo.

Previously, opponents were allowed to use their arms and legs in this sport (often at full strength) and strike with almost no restrictions. The uniqueness of kickboxing workout lies in the fact that it can be performed in pairs or alone, with different devices or even with bare hands. Traditionally, some warm-ups and fights are held barefoot, while others demand special French-style shoes.

This sport has changed during its development, and this applies not only to the rules, equipment and participants. To understand the kickboxing revolution, you need to know its history.

Boxing history: technique then and now

Many people believe that kickboxing has its origins in Muay Thai, which will soon be 300 years old. According to another version, it is a full-contact version of karate, and until a certain time, there wasn’t almost anything forbidden to fighters.

Oriental martial arts came to the United States only in the 1960s, and they started to gain popularity, change, and improve rapidly. The original version of nascent kickboxing lacked the following limitations: 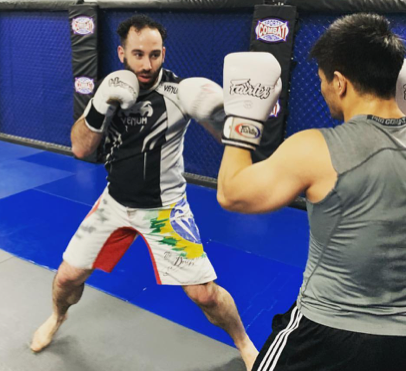 There were always prohibitions on strangling, blows to the body, back of the head, spine and groin. As kickboxing became a professional martial art, different organizations emerged: the professional PKA (1974) and the amateur WAKO (1976). The first championship took place already in 1978, and after that, the army of fans began to grow exponentially.

Japanese kickboxing is more similar to Thai boxing, if you don’t take into account a number of distinctive characteristics, as well as the ban on elbow strikes. In 1993, after the creation of the first K-1 company, this sport took root, and its popularity is growing to this day. The Japanese version can be considered “light”, more suitable for women and amateurs.

This is one of the least traumatic types of wrestling, therefore there is kickboxing for kids and women. Women's kickboxing has become one of the newer types of this sport. According to its rules and peculiarities, it is more similar to taekwondo and presumes partial contact of opponents. Speed of reactions and flexibility are appreciated here, cunning tactics are used.

Modern kickboxing has taken on a new look thanks to official companies that called for adherence to professional ethics, legalized rules, the use of equipment and basic techniques:

For kickboxing workout, fighters need obligatory clothing and protective elements: shorts or pants, hand wraps, helmet, gloves, groin protectors for men and chest pads for women, foot and shin pads, mouth guards. This is a mandatory set that can be used incomplete only in some cases and during training.

Currently, there are two of the most popular types of kickboxing for all age and weight categories of athletes: American and Japanese. Each of them is spectacular in its own way, some techniques are allowed and prohibited here. Permitted punches are hook, punch, swing, backfist, uppercut, and as for kicks, they are low-kick, round-kick, japping, front-kick, and others.

During a professional battle, opponents' points are calculated not only for the use of each of the blows, but also for the quality of their execution, efficiency and other indicators. Therefore, a fighter needs not only to use blows, but to calculate them in advance and apply them at the right time.

How kickboxing can change your body and life

Kickboxing allows you to train in pairs or alone with the same effectiveness. This sport will have a noticeable effect on your body even after the first months of training:

All of this because of a variety of workouts, which include push-ups, lunges, squats, and hitting. Also, there are running, jumping rope, using pillows, shields, makiwaras, punching bags.

The life of kickboxers can also change. If a fighter came to play sports at an early age (young, or even as a child), they have a chance to become a professional, be famous and earn decent money. Athletes who started kickboxing later, will be able to improve not only the physical condition of their body, but also:

Although kickboxing is considered one of the most brutal martial arts, it is in great demand. Kickboxing classes for women are especially popular. Most girls are involved in this sport for self-development, and they get many useful self-defense skills at the same time. Signing up for kickboxing means becoming bolder and more self-confident, gaining important knowledge, and applying the acquired skills for the best.